Eli’s story really started 11 years ago when he first came to the farm.  His previous owner trained him for jumping, but since she wanted to move up in ranks, she needed a taller horse.  At 15 hands, this quarter horse wasn’t going to make the grade, so to speak.

Eli has always had an old soul.  I see his anxiety now, but didn’t know what to look for back then. 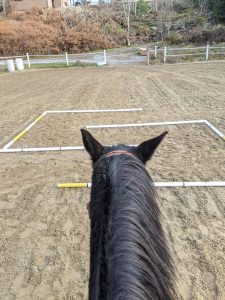 During 2020, I had been doing weekly dressage lessons with him, trailering all over the state to ride trails, and taking him to nearby clinics.  For years, Eli had been showing signs of being “off” that I couldn’t seem to pinpoint, although it seemed to have something to do with his front feet or shoulders.  Various treatments helped for a bit, but gradually the moments he was off were more pronounced and more persistent.

Last fall, I realized he needed to be semi-retired and found a younger horse to bring along in training. My veterinarian convinced me to have another farrier look at his feet.

We all just get stuck sometimes with a long-time provider.  This can be both positive and negative.  I won’t bash my former farrier, for he didn’t do anything with malice and I truly blame myself for not seeing a change needed to be made much earlier.

Over the years, Eli had developed a bulge on both rear hooves.  The Essential Hoof Book by Susan Kauffmann and Christina Cline has been helpful in furthering my education about all things hoof related.  According to their book (and my veterinarian), this bull-nosed effect on his rear hooves was a result of too long a toe, creating a negative plantar angle of the coffin bone inside.

Correcting his feet, finding a new farrier who understood what was done and how to keep him in balance, and giving Eli time off to adjust to the new hoof angles was all the easy part.

Now 18, the years of being long-toed in the rear has taken its toll on Eli. There is no one part of a horse that isn’t connected with the rest of his body.  Eli was always off with one front hoof or another. He would lift his head, thereby dropping his back, and his front end would be choppy and short-strided. 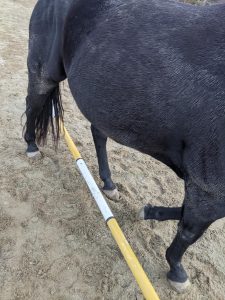 Eli also started refusing to leave the herd. I knew he was lame off and on, but I blamed the early start he had with jumping, and also attributed it to recurring Lyme disease. Both may have contributed, but I believe mostly that it was all due to his rear long toes.

So this year has been a year of rehabilitation for Eli.  Finding new postural habits that increase his range of motion, along with elongating his neck, stretching his topline, and allowing his back to open up have been some of our goals.

Again, use of the ground poles has been instrumental in our work.  There is just a long neck in front of the saddle that wasn’t there before.  He stills feels off sometimes, but then it goes away as he works on lengthening his stride.

Christina Cline, a presenter at the Best Horse Practices Summit this fall, pointed out that long term negative plantar angles causes permanent compaction of the digital cushion. Think of the digital cushion as the innersole in your sneaker.  Over time you have to replace your innersoles or buy new sneakers. Neither is an option for a horse.

We have made progress, but this journey towards looseness, suppleness, and balance will be a long haul.  I hope to have another 10 years of riding him, but only if I put in the time and effort and keep it up moving forward.

Eli happily leaves his herd now.  It wasn’t about me or his buddies; he was showing me in his own way that something hurt.  Some horses will buck, kick, rear, or bite to avoid more pain.  Eli just stopped moving forward.