Hank’s story began when he arrived here over a year ago, bought by my boarder.  He was trained as a reining cow horse out of state and came to Maine to be a potential barrel racer.  For whatever reason, he wasn’t what they were looking for, so here he is at my farm. 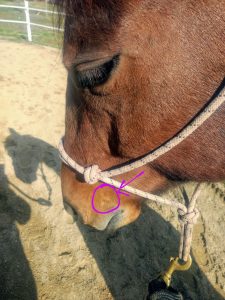 While a horse’s background in training, handling, care, and living arrangements do make a lasting impact on their life, what is most important is the here and now.

I’ve never seen a horse with such rock-hard muscles as this guy. He was aptly named Tank before he was given a new name to signal a new path.  Muscles shouldn’t be tight like that.  It’s an indication of tension.  Tension can stem from physical or mental issues.  Hank had both.

So here we had a kind horse that was filled with anxiety inside and out, trying to develop healthy feet, and find his place in a new herd.  Other than basic hoof, dental, and veterinarian care, he was pretty much left alone to integrate with his new herd and settle into his new location.

By spring, his feet were almost completely healthy and he seemed settled.  But as soon as I took him into the arena, his anxiety level increased exponentially.  Just trying to walk next to me was really hard for him.  Finally, I noticed that he would tighten his trigeminal nerve just before trying to bite me. Then he would visibly try to relax, only to have that nerve tighten up again before the next bite attempt.

So I took him for walks outside the arena.  He wasn’t trying to bite me anymore, but he was trying to bite everything he passed.  Grass, branches, leaves, twigs – anything to try and pacify himself. 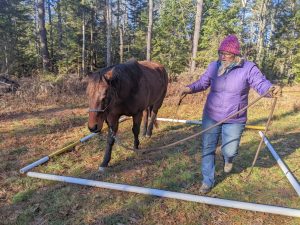 I then realized that he needed more help than it appeared on the surface.  Over a year before, I had picked up Jec Ballou’s book of 55 Corrective Exercises for horses.  I delved into that book more than ever.   I got the ground poles out, I continued walks with Hank outside the arena, and I also left him alone with his herd (mainly because work became very hectic and stressful and it was the summer of a million degrees and even higher humidity).

Fast forward and eight-year-old Hank is relaxed in the arena now, walking next to me, as we traverse different pole patterns and work on haunches in or leg yields.  He has blink-y eyes that look at each obstacle, his muscles are pliable and yielding to the touch. He has developed a flow-y walk and his anxiety tics are less frequent.  I have yet to see his trigeminal nerve bunch up again, but he still often rubs the side of his nose on his legs, which is a sign he’s releasing tension in that nerve.

I found that lunging Hank around me using the rope and halter is another anxiety trigger.  His head immediately comes up, he looks at me with a side eye, and his body becomes all tense.  My best guess is that this method of training was done too much, too often, too rough, too something.  Again, it really doesn’t matter if his complete history is known. It’s more important to move on to something the horse can relax doing.  I’ve also started using a gym mat to provide an unstable surface for him to stand on.  According to Ballou, this will activate and challenge his trunk muscles.

While I was away in Kentucky for the Best Horse Practices Summit in October, I returned to find that Hank was grinding his teeth while waiting to be fed.  He also ground his teeth when I first took him back to the arena.  Basically Hank was unpacking more baggage.

Horses can get PTSD.  It can come from a traumatic experience, from rough or abusive handling, or it can develop from repetitive workouts that are confusing to the horse.  Whatever the reason, the solution is always to work with the horse you have now, today.  So I set up a random ground pole exercise for Hank.  His former training would have definitely included a lot of repetitive systemic exercises, so my goal was to offer something completely opposite.  Hank has responded so positively that his teeth grinding became less frequent and he hasn’t done it again when handling him. 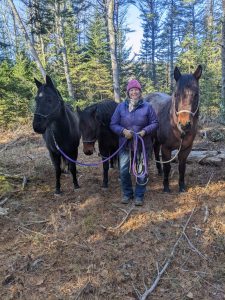 I’ve learned so much from Hank.  I’ve never seen a horse “wake up” from being shut down.  I have a feeling that more baggage may need to be unpacked, or we may need to unpack the same baggage, but that doesn’t matter.  What matters is that he has support when he needs it to sort through his past experiences and build new, healthier ones.