Editor’s Note: Amy Skinner is a regular guest columnist and has been a horse gal since age six. She will present an arena demonstration with fellow trainer and rider, Katrin Silva, at the Best Horse Practices Summit.

She rides and teaches dressage and Western. Skinner has studied at the Royal Andalusian School of Equestrian Art in Spain, with Buck Brannaman, Leslie Desmond, Brent Graef, and many others. Visit her site here. 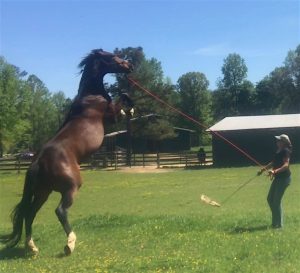 A client recently asked me why I was not afraid when working with her horse. Quixote had lunged at me, kicked at me, and tried to bite me. She said she was afraid of him. Why wasn’t I? He was now standing peacefully and with a soft eye while we groomed him. He was not the horse he once was.

I thought about it for a while before answering. Finally I said, I’m not afraid of him because I understand him. He’s only behaving how he learned to behave, how he thinks he needs to behave to get by. Being afraid of him would do him a tremendous disservice and would keep me out of the moment, unable to think clearly and react.

Quixote’s behavior wasn’t personal. Though the front feet were aimed at me, he viewed his entire world as a threat. Imagine living life that way and how deeply unhappy he must have been.

I don’t waste my time with fear because I’m busy trying to change his life. When you understand the horse’s mind and have a good idea of what causes their behavior, fear tends to go away. Imagine being on an airplane for the first time and 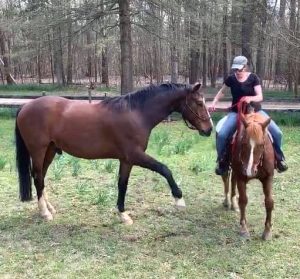 hearing the loud engine, seeing the wing flaps lift, and feeling sudden turbulence. If you don’t not understand how airplanes work, or the purpose of these sounds, it’d feel scary. Similarly, when people don’t understand what horses’ expressions or what causes their behaviors, they may get afraid.

Fear is warranted when you understand what you see, but lack the skill to do much about it. Fear is nature’s way of expressing danger, and it’s important to listen to that feeling. However, with knowledge and skill, you have the power to eliminate a feeling that can take control and overpower common sense.

“Don’t be afraid” is among the worst pieces of advice I’ve ever heard. If you fear working with a specific horse or maybe all horses, get some help. Find a good coach who can walk you through exercises that build your knowledge base and confidence. 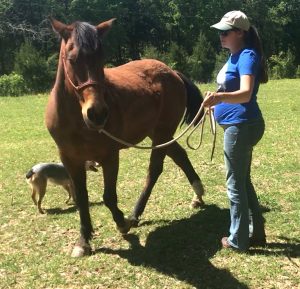 Later in the training

If you see relaxation building on the horse, that’s one you’d want to confirm. If you see fear, tension, distraction, etc, learn to redirect to something better, ideally before those behaviors exhibit themselves. When you have knowledge and skill under your belt, you have the freedom to be spontaneous, flexible, and most importantly, mentally quiet. Without the voice of fear distracting you, saying “what if” in the background, you can accomplish so much.
As for the horse that bit, kicked and lunged at me? Quixote no longer does those things. Months of being redirected to more positive behaviors have shown him how to be happy, relaxed, and engaged in his work. Fear on my end would have kept me out of the moment and kept me from helping him.