Folks say you can work with a horse, then leave it be.
For weeks. Months. Years, even. 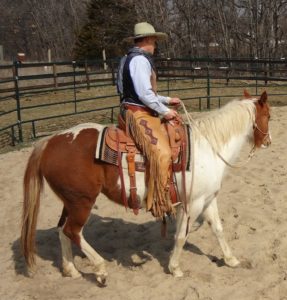 As long as you left it in a good place and on good terms, it’ll be pretty easy to pick up where you left off. Horsewoman Kyla Pollard observed as much when she revisited a gelding two full years after starting him, with no one riding him in between.

“I’m pleased to say he didn’t forget too much,” said Pollard of the nine year old. “I’ve had him on fresh cattle, roped off of him, and hit the trails solo. He’s well on his way to becoming a great pleasure horse for his owner.”

With that in mind, we returned to starting Jodi, the four year old paint acquired last summer. Over winter, we hadn’t done much more than groom her and handle her feet a bit.
Steve Peters brought her back to the round pen with the idea of stirring up as little drama as possible. He saddled her and worked her on the ground without much fuss.
Next, he climbed aboard. 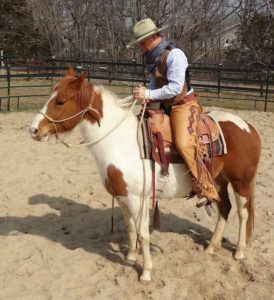 I had camera poised and was ready for the fireworks.
Nuthin’.

She stood for a minute, then walked clockwise around the pen a few times. Then switched directions. She was a bit nervous, but clearly in a good place.

“She’s really come to trust me, so I think at that point my being on her back was almost like: ‘My pal’s up there.’ That’s how it felt,” said Steve.

I was ready for a fun, hats-off, Yee-Ha! photo. What I got was Ho Hum.
But I’ll take that kind of progress any day. Stay tuned…

Jodi touches her whiskers and lips to the saddle pad, after it’s off her.