Bryan Neubert, one of the few people who worked with the men many consider to be the founders of natural horsemanship: Ray Hunt, Bill and Tom Dorrance, is coming to Maine later this year. Click here for events. 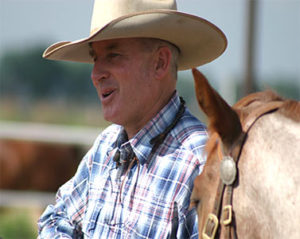 To hear him tell it, Neubert just lucked out. He happened to find work with Ray Hunt and happened to live next door to Tom Dorrance.
“In hindsight, I was extremely blessed. I could not have been in a better place anywhere,” said Neubert, who travels widely as a clinician but is spending some down time at home in Alturas, CA. In December, he fell from a hay stack and broke his arm.

Since then, he’s had his arm in either a cast or a velcro splint, unable to bridle or saddle his horses. He tried riding in a recent sale with Patti, his wife, lending a hand. “It wasn’t too fun,” he said. So he’s been working with his dogs and tending to non-horse chores at his 425-acre ranch. In a few months, though, he’ll be back on the clinic road. 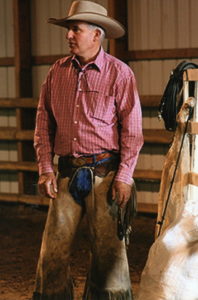 “Occasionally someone takes it and runs with it. If you find one person in the bunch who wants to learn, that’ll be a success,” said Neubert. “People think a clinic is the answer, that it’s going to turn the light on,” continued Neubert. “But it depends on what you do with it.”
Neubert tells his students to assume they’re not going to make progress during the clinic. “It’s going to be at home that it happens, after you start practicing,” he said.
Bryan traveled with Tom Dorrance as he started to offer clinics in the 1970’s. Back then, holding clinics was a brand new idea. “I thought the word ‘clinic’ had something to do with a hospital,” said Neubert with a laugh. And yes, he confirmed, he has never turned on a computer. Ever. He’ll take Intuition over Internet anytime.
Neubert said Dorrance told his students, “Don’t try too hard because it’ll keep you from getting it.”
Neubert sees this in his students, too.
“If I’m asking a second grader, ‘what’s nine plus nine?’ and I tell him ‘I’m going to whack you if you don’t know the answer’…That’s not conducive to learning. If people are calm, they’ll get it…Cool it. Let it happen.”