Tis the season for polls and surveys. Take a quick one – how many of your horse-owning friends also have dogs?

I’m betting nearly all of them do.

Woof and Hoof. Bark and Buck. Dogs and horses go together.

But how many have dogs that go with them when they ride? 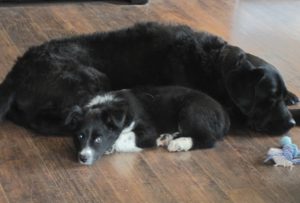 That’s what I’m looking forward to with Kip, the new addition to our canine family. No surprise that we discovered her while picking up a wagon of hay from my hay guy. His Australian Shepherd had a litter of eight. Rolly polly puppies colored black and white and merle.

Aussies are cut well to the task of Ride Along Dog. (And I’m not talking about the fluffy poodle that sits on a cushion, riding shotgun on a Sunday drive.) They’re built like hearty, long-distance runners, have great endurance and tend to stick with the horse like glue.

Our other dogs – a Basset Hound mutt and a Black Lab – are decidedly NOT Ride Along Dogs. They have neither the physique nor the character for it.

But already Kip is proving worthy to the task. At just four months, I worried about exercising her too much. My vet chuckled. “I think she can probably handle anything you give her. The more exercise the better.” She tracks right along when we head out for our 2-3 mile runs. 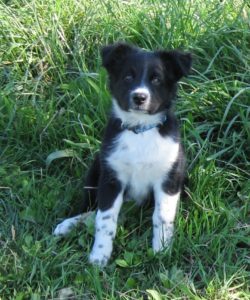 We haven’t introduced her to the herd yet. Should be interesting. Jodi, the four-year old mare, has already shown us she’s super curious and up for a game of ‘Let’s Git the Dog.’ 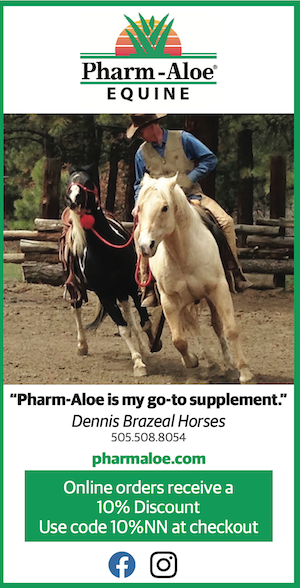