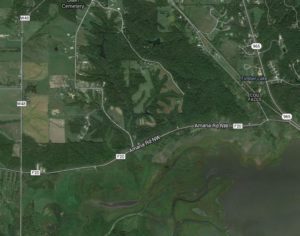 Horses need space. Riders do, too.

If you look at Swisher, Iowa by satellite, you’ll see lots of open space. When I moved here from Maine, I was excited to explore the 14,000 acres of nearby Hawkeye Wildlife Management Area.

Until I got a ticket.

I was cited for riding my horse on public land and fined $100.

Turns out the Hawkeye Wildlife Management Area is reserved for hunters and fishers. Despite the negligible environmental impact (hoofprints? The occasional poop?) and acts of good citizenship (calling in poachers, carcass dumpers, litterers, etc), I was labeled persona non grata by the Department of Natural Resources.

The citation left this horsewoman frustrated and curious about the state of horse-friendly public space.

Iowa ranks 49th out of 50 when it comes to the percentage of publicly owned land.  Just one percent of its land consist of parks, forests, and grasslands. Horse riders are unwelcome on most of them.

Maine, as many of you will attest, doesn’t do much better. It ranks 37th. Read more.

Many of us enjoy riding on private land owned by friendly neighbors. But as time marches on, development often turns old trails into subdivisions, fields into fenced and gated backyards. 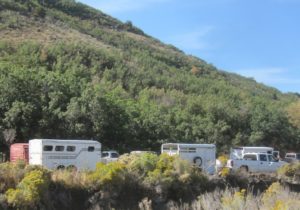 It’s a drag. For those of us with an open-space craving, it can be downright depressing.

But consider Utah.
The state boasts five national parks and has a greater percentage of public land than every other state except Nevada and Alaska. Combine that with a culture that welcomes, embraces and accommodates horse riders.

If a chance ever came to move there, what trail rider wouldn’t jump at the opportunity?

That chance has arrived and this girl is Utah-bound.

Posted in General, Maine, On The Move, On the Trail.