Editor’s Note:  In the fifth installment of a multi-part series, we hear from Jeanette Hayhurst, a long-time and avid horsewoman from Barstow, California. Like many of us, she has continued to connect with horses, even when her age and physical limitations kept her from doing a lot of riding. Kudos, Jeanette!

About three miles from camp we turned onto a dirt road and headed downhill toward our route. We were told there was actually standing water across the trail at the bottom. How glad I was that I had taken Danny across several water crossings and knew he would be fine.

All of the sudden, I heard a loud screeching sound. Danny leaped up and forward. I was glad I had a good grip on the reins. It turned out my right front wheel had frozen up.

Fortunately, the group stopped a couple minutes later, just before the water crossing. The good news about traveling with an experienced group of teamsters is that someone knows how to fix just about anything. Several people came to my aid and helped me diagnose the problem. I had the right wrenches in my spare parts kit and someone else had WD-40. 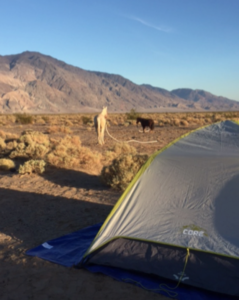 In no time, the problem was solved and we were back on the trail.

The wagons skirted the standing water while support trucks gunned it through mud. We settled into a steady pace as the weather began to heat up.

At lunch, we took a break. Wagons can never be unattended so swampers and outriders held the teams so drivers could get lunch and take a potty break. One of the outriders held Danny while I got him water. He drank willingly.

By mid-afternoon, we had reached the Salt Tanks, our camp spot for the night. The support trucks were there and had put out large water buckets for the horse water. I found a place to stake out Danny, next to an outrider’s gelding. I thought we were far enough away, but then my little man decided he was a stud and backed up to his neighbor.

I moved him out to the edge of camp next to a sweet, half-Arab, palomino mare. By 5:30, I set up my tent and realize I am exhausted! The adrenaline from the first day had worn off and I was ready for bed.

The next day’s drive would be the longest, about 18 miles.

We started off at 9 am with the weather still cool. This road section had some incline and was quite sandy. Danny had to trot to keep up. No matter how fast his little legs walked, he just could’t cover the ground like big draft horses and mules. To top it off,  we had record-breaking heat of 95 degrees. 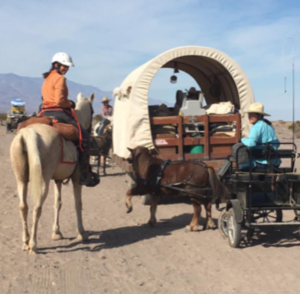 I was glad I had conditioned Danny well, but was wishing I’d at least partially shaved him. (I had decided not to because last year, the weather was so cold that water buckets froze during the night.)

One of the pairs of Percherons was breathing heavy at our mid-morning stop, so the veterinarian wanted them to be unhooked and to ride in the trailer. The welfare of the animals is number one so we were glad to have the stock trailer available. By lunch, Danny was breathing pretty hard and ready for a break. I gave him water and I wet him down.

After the stop, he was ready to go. The driver ahead of me had two beautiful bay draft mules. He offered to slow his mules down a bit so I could drive Danny in the shade of his wagon canopy. That made a big difference!

Hours later, everyone was happy to be pulling into Tule Springs for the night. We’d spend a rest day here which would allow all of us to catch our breaths.

Coming in Part VI: Waffle Contests and a Potluck! 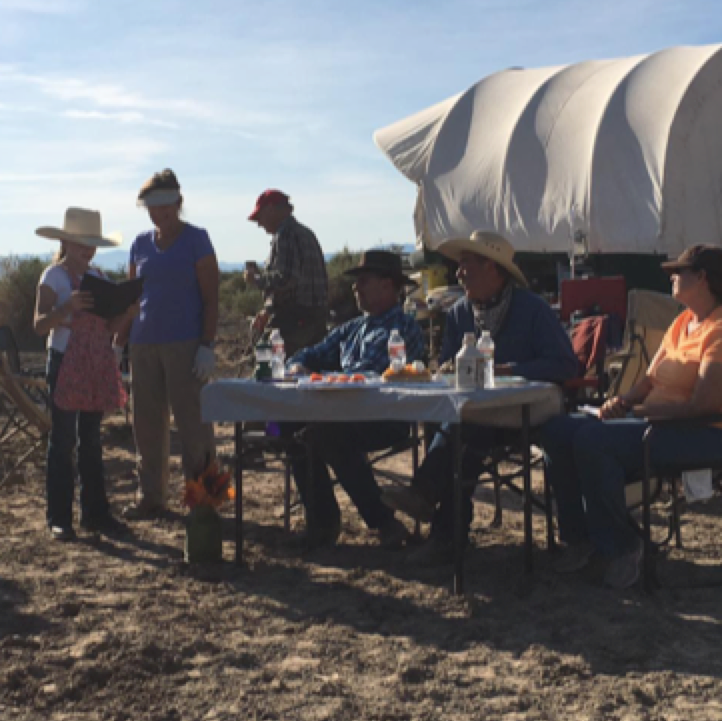