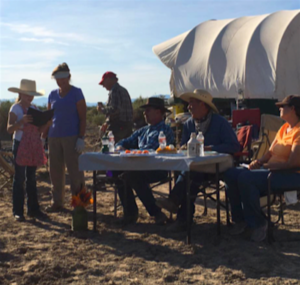 Today was the renowned Waffle Contest and potluck with the Death Valley ‘49ers. Everyone was happy for the layover day; it gave stock and people a chance to rest and recharge.

Waffle contest participants cooked waffles the old-fashioned way and presented them to the judges. In addition to being judged on the quality of their waffles, the participants were judged on the “quality” of the story they made up to go along with culinary creation. It was fun to taste the waffles and listen to the laughter as the stories were told.

Later in the morning, there games to play. But I went back to my tent to get some rest. I looked over at Danny; he was laying down too.

That evening, each wagon showed off their dutch oven skills and made something for the evening’s potluck dinner. Members of the Death Valley ‘49ers drove into camp and brought even more food. To top off the evening. a three-piece Western band entertained us with cowboy songs.

Both nights camped at Tule Springs, we could could hear coyotes howling. We had surrounded their watering hole. We would be gone soon and they would have the place to themselves once again.

Thursday morning the weather started off cool. All of the stock was ready to go again as we turned toward the Salt Flats. After an extra day of rest Danny had the pep back in his step. He now had hoof boots protecting all four feet. He has always had tough black feet and plenty of hoof growth, so I thought the boots wouldn’t be necessary. But after driving on the hard, rocky roads, I was so thankful for them.

We brought up the rear as usual and it was awesome to look out ahead and see wagons making their way across the salt flats. I was transported back in time and connected with the pioneers from the past century as they made their way across the harsh land of Death Valley.

After lunch we started up out of the valley. As we neared paved road, we were met by two National Park Service rangers. They would escort us as we traveled on the highway and over to our evening camp site at Desolation Canyon where a beautiful view awaited us.

We were surrounded by the jagged ridges of the mountains that parted to reveal the desert below with Furnace Creek in the background.

That night we had a nice camp fire and agreed on what time to meet for our group picture. The next day we would drive into Furnace Creek as part of the 50th Golden Anniversary Death Valley Encampment. Hundreds of visitors would line the street as we drove in.

One of the other drivers commended me on what a great job Danny and I had done on our first Death Valley drive. He said we should parade in with bells on and then handed me a set of bells. I thanked him and smiled, But I didn’t think Danny had ever worn bells before. 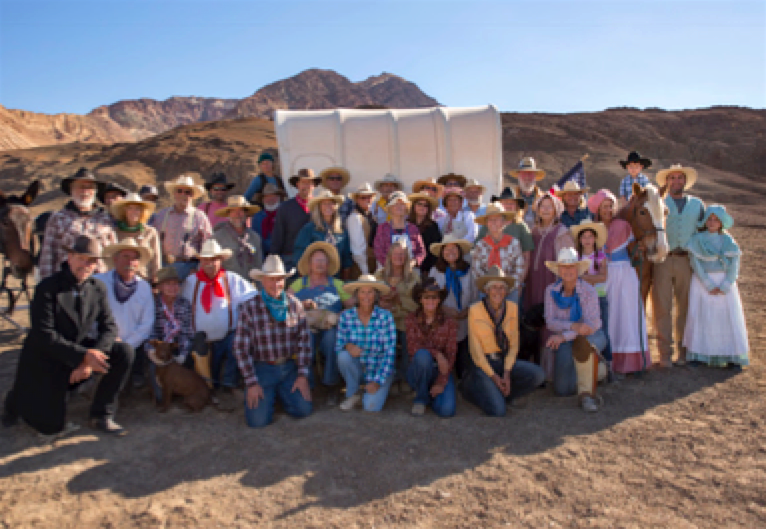