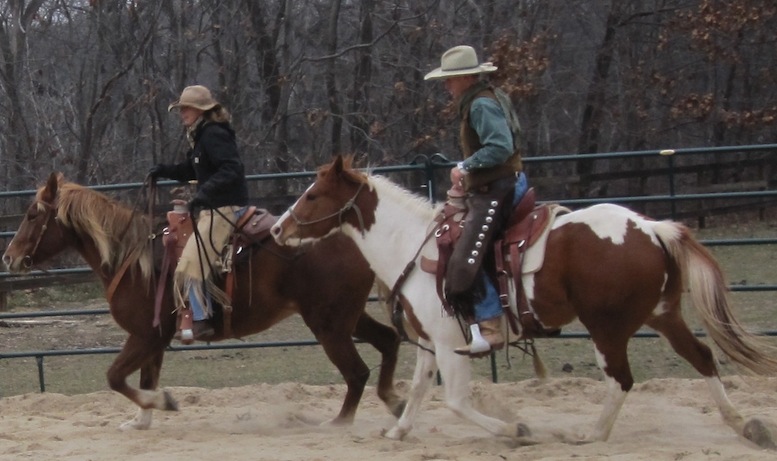 Progress with the big girl took a big step forward today as we worked with her in the round pen.
Steve worked with another horse first and Jodi stood outside, wanting in.
A good sign!
When she got her turn, Steve first worked on the ground with and without the saddle.
He’d introduced the saddle over several sessions. She doesn’t take it in stride yet, but after some initial tense moments she settles nicely to the thing on her back.

Now, we were ready to put a live thing on her back.

Steve.
He’d been up a few times earlier and ridden out a buck or two.
This time, we worked her by using Shea to pony her. They both did great. When any iota of panic in Jodi came up, we nipped it in the bud by turning her into Shea or just lightly restraining her.
After some time, I gave Steve the line and we went around together. I think Jodi realized she wasn’t tied to Shea but we still moved in concert, walking, trotting, turning.
Then I moved Shea left. Steve stayed straight. Jodi moved out as he asked with no hesitation.
A fun, positive day.

We got a good horse here.