Editor’s Note: Kari Weil is University Professor of Letters, College of the Environment and Feminist, Gender and Sexuality Studies at Wesleyan University.  She is the author of Precarious Partners: Horses and their Humans in Nineteenth-Century France (University of Chicago Press, 2020), Thinking Animals:  Why Animal Studies Now and numerous essays within the fields of animal studies and feminist theory. 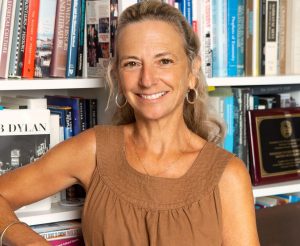 I will begin by saying that I have been a lover of horses, and an aspiring rider since I was a very young girl.  When I first watched the video you all saw and heard Ray Hunt speak about treating horses as slaves, I was reminded of an incident –actually an academic conference–where I was asked how, as a person involved in animal studies, I could continue to ride.  Isn’t putting a bit in a horse’s mouth like putting shackles on a slave, he asked.  I responded no, I don’t believe so, but that was about it.  I didn’t have a ready answer, although I knew of what had been called “the dreaded comparison” between human and animal slavery.  It was a comparison made already in the 18th century, when the Swiss philosopher, Jean-Jacques Rousseau wrote, “It is neither for slaves nor for tamed horses to reason about freedom… they only know their broken state.”  “Broken” is a term I don’t use.  I prefer educated and will say why. 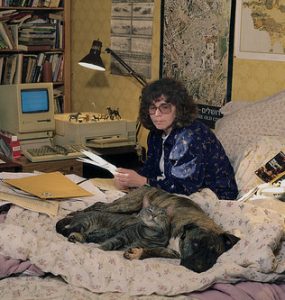 Of course, I know very well that bits, like whips, can be instruments of abuse.  I have come to think of them, however, as more like a pen we would put in a child’s hand in order for them to learn how to write and communicate.  For me, bits and reins are instruments of training, and training is a way to develop a language between horse and rider, one with which we can ask them, not about their freedom (an abstraction by which we humans are often deceived or so suggested Franz Kaka’s ape, Red Peter), then about what they can and will learn with their human and so about the work we can two accomplish together.  Questions about who has language and about what language is, does, and can be have been central to my academic life as a professor of literature, and it was reading the philosopher, poet and animal trainer, Vicki Hearne, that first revealed to me how these questions are also integral to training and working with horses.  From that moment on, my interest in animals in general, and for horses in particular, also became an academic interest and part of my research.  Hearne writes about training as a language—not the language we teach chimps and which consists of putting a particular sign or word together with a particular meaning or signified. Rather, language for Hearne is a way for its speakers to travel somewhere together.  “The integrity of a language” she writes, is “the physical, intellectual and spiritual distance talking enables the speakers of that language to travel.”   Training is a way to give horses (like dogs) the tools to enter into a relationship in which they too can speak, not merely react.  It is way to recognize that they too have something to say, even though we may not always understand them. This is why good training must also be a learning experience for the human as well, one that enables us to develop new capacities for listening, hearing, and above all feeling, as well as for translating these into thoughts we understand, realizing that our translations may not be perfect.

The difficulty is that horses and humans are unequally endowed in terms of their communicative and sensorial abilities—whether visual, oral or kinesthetic.  The riding relationship depends upon the very senses of touch and feel that have been disparaged by humanist prejudice.  Because of this, it can challenge the very ground of the human-animal hierarchy and reveal our shortcomings, both physical and intellectual.  We may distinguish horses in terms of temperament, movement, honesty or sneakiness, but they know us and our emotions in ways that we may not never understand and often cannot know.   This is why the philosopher Stanley Cavell once suggested to Vicki Hearne that horses might stand as a “rebuke to our will to remain obscure.” Horses read us through our skin and muscles and in order to ride and to train well we must learn to hear and read them through their skin.  We saw in the film how a horse can react to a fly.  So too the reaction to a human. “Every twitch of the body will be a loud symphony to the horse,”  declares Hearne.

I remember many years ago when a young woman at my barn had been hurt in a car accident and asked if I might be open to exercising her horse for her—a very highly skilled and beautiful Oldenburg horse, as I recall. I was thrilled.  But I the first time I rode him, (and if I remember correctly) I tried to ask for a canter and instead he gave me a passage—a very high stepping trot.  I tried to ask again, and, got the same response until finally, and as if the horse knew exactly what I was asking for, he jerked his body in such a way as to thrust my legs and seat into the correct position  to ask for canter…and then we cantered off.  This is how you need to ask, he was telling me.  And so I learned. 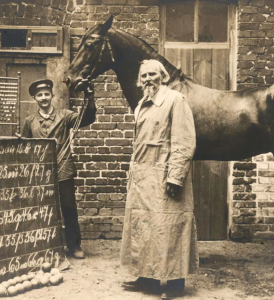 Some of you may have heard the story about the horse, Clever Hans or what, in scientific studies of horse intelligence, became known as the “Clever Hans Fallacy.”  Hans became famous in Berlin in the late 19th and early 20th centuries, for a remarkable feat —he could perform addition—or so they said.  His trainer, Willhelm von Osten, would ask him how much two plus two or five plus six was and Hans would tap out the answers with his hoof.  It was another student at the psychology institute who determined that the whole feat was a hoax.  Hans could not add.  The horse did not do math.  But what Hans could do was far more impressive, if discounted as cheating at the time.  For Hans would read the bodies of whomever was asking him the questions, such that he would tap his hoof in accord with their bodies, continuing to tap as the  human  leaned with mounting tension to watch Hans closely, and then soon as the tension was released and the human body returned to its straighter stance indicating that the correct number of taps had been performed, Hans would stop his tapping.   This then, is one example of how well the horse could read cues from his humans, cues moreover-and this is the most amazing part– that Hans’ trainers didn’t even know they were giving.  Indeed, as the Belgian historian of science, Vinciane Despret, has written, what Hans did was even more remarkable than was realized. “Yes, it was a beautiful case of influence, but it was moreover a wonderful opportunity to explore a fascinating question. Indeed, the horse could not count, but he could do something more interesting: not only could he read bodies, but he could make human bodies be moved and be affected, and move and affect other beings and perform things without their owners knowledge.”  Hans’s greatest talent, Despret explains was to be able to switch from one sense, that of kinesthesia or  reading the human through skin and muscles as horses generally do, to another sense in order to read the body visually.   This was why he was truly talented.

The story of Clever Hans has much to tell us about human-horse relationships and about training more generally. For as Despret insists, who influences whom is a question that does not have a clear answer. This is why training is and must be what Donna Haraway would call a “becoming with”—a relationship in which horse and human are open to each other, open to be affected and moved by each other, open to learn from each other.   Moreover, no horse and no human are exactly the same in their capacities to speak and respond, or to affect and be affected. And so each training experience is a new one and in each, horse and rider each become something or someone they weren’t before, someone they discover only in partnership.  What or who that is we may not be able to put into words just as there may not be adequate words for what we feel when we ride a horse.  To be sure–and this is something that much of my research comes up against–words often stand in our way and in the way of getting to know a horse on their terms, hence, of traveling the distance together.  This, I believe, is why the philosopher and ecologist David Abrams has said that the more he spoke of animals, the less able he was to speak to them.

Understanding the language of training, I believe, can help bring us to a larger, more ecological view of ourselves as one of many creatures in the world—a world in which we are not the only makers and interpreter of signs.  For we too are being read and interpreted by those other creatures that surround us, often without our knowing.  We rarely pay attention, rarely listen to the many voices out there to hear what they are saying, and we rarely stop to think what it is we might be saying to them, without intending to, or even knowing that we are saying anything.

Working with horses can, I believe, begin to open us to the many voices that are out there, make us aware of the many ways that other creatures—from flies to horses—are saying something—and have something to say, something we should learn to hear and to respond to.