If you’re dwelling on the downside of your day, your year, your life, I have one name for you to consider: Michael Richardson. 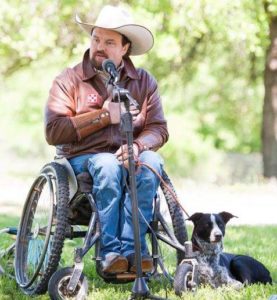 Recently, the 49-year old horseman got up in the saddle for the first time in seven years.

I first met and reported on Richardson four years ago at the Alberta Horse Breeder’s and Owner’s Conference in Red Deer. Richardson, who has a deep voice, broad shoulders, and a handsome face, spoke to large audiences and coached riders from his wheelchair.

At Broken R Ranch in Hico, Texas, “Michael’s goal is to build a rapport with the horse and human rather than use aids for domination, control, manipulation, or submission.  He shows us how we succeed through releasing, through observing, and enjoying the journey, rather than being preoccupied by the destination,” according to his website. 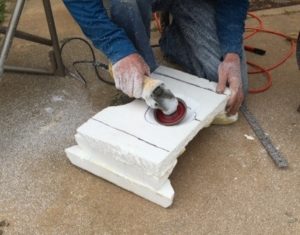 Work on the seat design

Richardson was paralyzed after a car accident in Montana three decades ago. In 1998, he was bitten on the buttocks by a Brown Recluse Spider, resulting in severe atrophy and skin deterioration, issues that continue to trouble him. In 2006, he was in another car accident that crushed a vertebra.

With help from a Colorado-based mobility company, Richardson started using a special cushion made with open-cell foam. “It’s very hard and allows heat, water, and air to move through,” said Richardson. “I can still feel the horse, but not compromise the 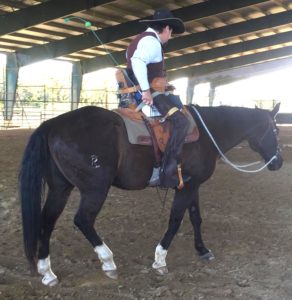 In the saddle after 7 years

Those first rides (again) felt as close to riding as an able-bodied person in 30 years, he said. “Pure jubilation. I was overwhelmed with emotion. To feel the horse like that again. It was worth all the wait, recovery, time, frustration.”

In a facebook video, we see Richardson move quietly and seemingly effortlessly. The horse is collected and relaxed.

Aside from the special seat, Richardson rides strapped in with elastic and ripcord. If ever he were to have an emergency, he and the saddle would come off the horse. Before the spider bite issues, he’d ridden some 5,000 times in the special saddle. He’s had to self-eject (so to speak), just twice, he said.

Increasingly, Richardson is working with veterans and faith-based initiatives. He hopes the saddle seat development work will help paralyzed veterans get up in the saddle.

His attitude, as I found years ago in Alberta, remains as light and positive as the piaffe he managed with his horse:

“I’m incredibly blessed. I’m starting over the fourth time in my life. How many people have that opportunity?”

Read about Maine’s Carlisle Academy, which offers para-dressage and more.