One of our favorite rescue agencies is the Save Your Ass Rescue Long Ear Rescue in South Acworth, New Hampshire.

Executive director Ann Firestone relayed this heart-warming story of a recent new addition. We especially liked the dedication to Stan’s brethren during World War II. Read on for the full scoop. 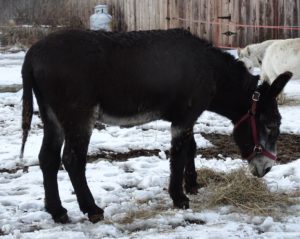 Stan came into the rescue in pretty rough shape. He was not at all friendly and wanted nothing to do with people or the other donkeys. He was covered in burrs and his poor tail was so matted it looked and felt like a club. His forelock and flanks were chock full of burdocks stuck tightly to his skin. He was examined by our vet and it was discovered that he is blind, with large cataracts in both eyes. He was also in dire need of dental work – it’s doubtful that he had ever had dental work in his lifetime. He had such sharp points on his molars that they actually punctured his tongue, and he had so much tartar build up on the outsides of his molars that the inside of his cheeks had become ulcerated. Every time Stan moved his jaw he must have been in excruciating pain. No wonder he was not friendly. 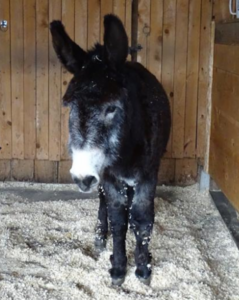 In the weeks following, Stan has blossomed. He is a new man. He must feel so much better! He is now friendly and seeks attention. He did not want to be touched when he first arrived and now he enjoys being groomed and has a big honk for me in the morning when I go out. He gets on very well considering his age and disability.

I decided to call him Stan, named after the father of a dear friend. She related this story:

“My father, Zbigniew Stanislaw “Stan” Jaworski, fought in one of the bloodiest, decisive battles of WWII in Monte Cassino, Italy. He was a Reconnaissance “point man,” locating and mapping enemy lines for the Polish Army.

The Monastery, where Nazis were nested, stood at the top of a steep hill, accessible by 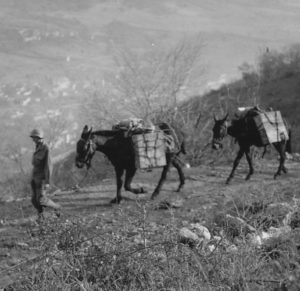 Pack animals during WWII in Italy

treacherous, narrow paths. Mules, horses, and donkeys were the only means of supplying Allied troops with essential supplies.

My father was given orders to scale up the hill to a bunker and determine Nazi location for artillery fire. As he began his trek up the hill, a pack of mules and donkeys entered the path from another end of the canyon, which raised serious concerns for Stan. The animals were loaded down with water, food, medical supplies, and ammunition and led by Greeks.

They passed by a huge stockpile of munitions at the base of the hill when Stan encountered the pack. Suddenly, the Nazis launched an attack on the encampment and hit the ammunition pile with a huge explosion. Shrapnel flew in every direction. Stan was knocked down under the weight of one of the pack animals. The donkey took the shrapnel hit and saved my father’s life.”

Read about Woods King, mounted soldier and general during WWII.

Posted in Reviews and Links and tagged save your ass. 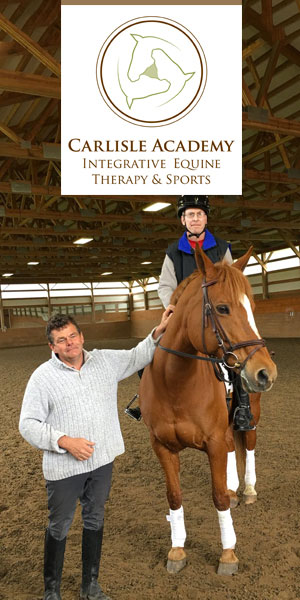