Guest columnist Tim Jobe runs NaturalLifemanship and is a leader in equine-assisted therapy. The Texan, who is also an accomplished cowboy poet and horseman, shared this point of view with us: 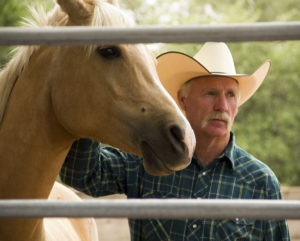 The horse is not a mirror. Before you start shooting, give me a chance to explain:

Would you say your spouse is a mirror? I don’t think I could get away with that. My spouse will react or respond to my emotions, thoughts, or feelings, but definitely doesn’t mirror them back to me. This also happens in a relationship with a horse. The horse responds or reacts to whatever is going on with me and hopefully I do the same thing for the horse. The horse doesn’t mirror my actions. In fact, horse training would be much easier if only this was the case.

If I am too aggressive, the horse may become passive and try to appease me. This often shows up as lowering his head and licking his lips. Some people see this as a good sign. I don’t think that it is. I don’t want my horse to try to appease or submit to me. I want him to make an intelligent, informed decision about the right thing to do.

Have you ever seen passive parents produce passive kids? I think that is pretty rare. It has been my experience that passive parents have overbearing, aggressive kids. I have worked with lots of people who have horses that bully them all the time. These people are usually too passive with their horses and it ends up causing aggression in the horse. That is in no way a mirroring effect.

It is true that when I am calm my horse has a tendency to become calm. Again, this is merely a response to me, not mirroring. If my energy goes up, so does that of the horse.

Sometimes the horse recognizes some of my needs and tries to provide for them, just like my spouse does or anyone else with whom I have a functional relationship. Yawning is a great example of this: when a horse repeatedly yawns she is trying to release tension, either in herself or in the person working with her.

During sessions, frequently, the horse seems to magically do things to meet the client’s needs. We see this in our other relationships but it doesn’t seem as magical because it is what we expect from good relationships. It is a response to our emotions, thoughts, or feelings – not mirroring. 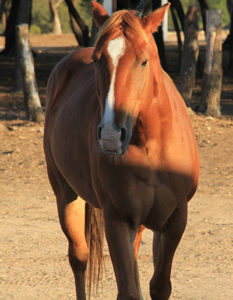 When we categorize it as mirroring, we take away the most valuable element of therapeutic work with horses. That is, the ability to build a relationship in which the emotions, thoughts, and feelings of each are important to both and responded to by both. A relationship with a mirror is called Narcissism. A mirror has a passive role in that relationship, and we believe a horse is more valuable when he/she has an active role.

Horses can only have that role when we understand that they are responding or reacting to us. If we assign the role of mirror to horses we are robbing them of an active status in the relationship. If we want the client to move to a place where they have an understanding of the patterns they create relationships, then the horse must have an active role in that relationship.

The horse is not a mirror. It is a living, breathing being capable of either a functional or dysfunctional relationship depending on what the human wants to build.