Editor’s Note: Amy Skinner is a regular Cayuse columnist and has been a horse gal since age six. She presented with fellow trainer and rider, Katrin Silva, at the Best Horse Practices Summit.

Buy her new book, To Catch A Horse here.

I’ve written a lot about going slowly and taking the horse’s time. But did you know it’s possible to go too slowly? Sometimes it can be just as damaging as going too fast. Going slowly isn’t good on its own. You must go slowly with timing and knowledge. 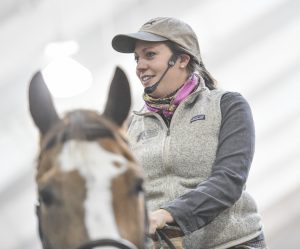 Sometimes a client will bring me a horse to work on a problem that has an easy fix. The problem could have been eliminated immediately had the client understood what they were looking at and had the timing to fix it.

Sometimes they want to be kind and soft, but, as a result, they become ineffective. The horse continues with the undesirable behavior and the client ends up nurturing a wrong frame of mind. This frame of mind is carried into all the work they do together, and over time it cements.

The problem that might have been a five-minute fix becomes a deeply ingrained habit.

In the interest of going slow and being patient, she would circle him around and try to load again. He kept repeating this behavior. It became worse and worse. Soon, he wouldn’t go anywhere near the trailer. When any pressure was put on him to walk forward, he became very reactive. In his mind, this is exactly what he was supposed to do.

If his crookedness had been corrected immediately, he might have walked right on. When I came over to help load him, I focused on keeping him straight. As soon as I got him thinking about staying straight, he loaded up and stayed there. I gave him all the time in the world to think and to make choices, but I was quick to block options that would lead to him being more confused about getting in the trailer.

While it’s important to go slowly with young horses, you don’t want to move at a pace that can cause boredom and lack of interest. If you repeat the same work every day, they learn to tune out or find coping behaviors:

Horses that aren’t focussed often spook more. Introducing new things frequently to a young horse can be very beneficial, provided the horse is not too anxious about it.

Going slowly is not beneficial if you’re missing important details and not correcting elements that lead to bigger problems.

Going slowly is not beneficial if the horse is bored or inattentive.

Going slowly is not beneficial if your timing is off.

Going slowly is especially detrimental if the horse is getting worse, not better.

Give your horse time to think and adjust. But don’t wait forever if their attention has left, or if they’re working on the wrong things. Guide gently, be flexible, and most importantly, be effective.