My Ah-Helmet moment actually occurred after the “moment.”

I signed up to take part in a “Saddle Up for St. Jude” ride near my barn. At that time, I had an Appaloosa gelding named Killian’s Irish Red. He was something of a character, so I went into the ride knowing he could very well decide he’d had enough, 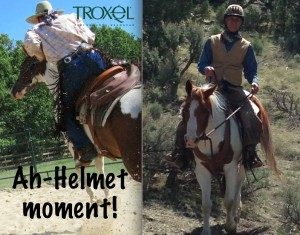 and turn into a raging nitwit. He surprised me, though, and after a short Come-to-Jesus session at the ride’s onset, he settled right in and was just a stellar ride.

A horse in a pasture, fenced with high-tension wire, tore from his barn and right at our group as we rode. He slammed on the brakes a good two inches from the fence, and the fence let loose a good “twang!” I thought for sure that Killian would freak. Instead, he looked at the raging horse in the pasture like, “What’s YOUR problem, dolt?” Three horses refused to go around a landscaping rock the size of a VW Bug; he walked right up to it and commenced licking it like a Tootsie Pop. So, I began to let my guard down, and by the end of the ride, I was feeling pretty happy. Instead of continuing to the driveway where the ride would end, three of us cut through the grass toward where a heaven of cold water and Amish BBQ chicken was waiting for us.

And then a generator sputtered to life at the side of the nearby building.

Killian shot three feet to his right, which kicked my right leg up in the air and over his back. For one Wile E. Coyote moment, I hung there, suspended, with my legs pointing skyward, my hands still nicely on the reins in front of me, and Killian’s cinch breezing by my left ear. Positioned just so, doing my best impression of a reverse pike, my shoulders hit the ground first. My rear end impacted second, and I took a time-warped moment to congratulate myself on not hitting my he- *crack* Nevermind. I still hit my head.

In the end, I came away from the experience with two cracked shoulder blades, an injury which still makes my chiropractor shake his head. I took my helmet home, and in the light of my bedroom, saw a number of small cracks spider-webbing around the interior of the helmet. That moment, my Ah-Helmet moment, coalesced into a cold ball of certainty in my gut: I would never ride without a helmet again. No way, no how. I hadn’t even thought I’d hit my head that hard – my shoulders had (painfully) borne the brunt of my fall. However, the cracks in that helmet could have easily been cracks in my skull.