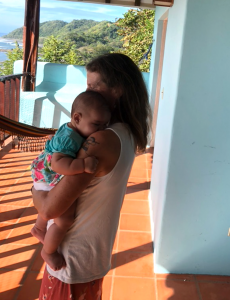 With Aila Lucia, for the first time

During the holidays, I navigated through Covid screenings, multiple security and customs clearances, three police checkpoints, 10 hours of driving, and six hours of flying to meet my family in Panama. It was late evening when I arrived, at last, in Cambutal, a small village of about 600 people on the Pacific coast.

Inside our rented cottage, I met for the first time my new granddaughter, Aila Lucia, born in August. I held her with wonder, admired her chubby arms, her deep brown eyes, and eventually handed her back to her father, my eldest son. It was way past her bedtime.

Perched on the arm of the couch, I took in the sublime scene of my three sons, their partners, and the next generation. They were laughing and late-night chatting in Spanish and English. I fell off the couch and onto the floor.

It was a brief disconnect between a relaxing body and a yet-to-relax brain. Or, maybe vice versa. It was funny as hell and had me considering how mind, brain, and body can work with and against each other, depending on the individual and depending on the moment – like distinct players in the game of living. 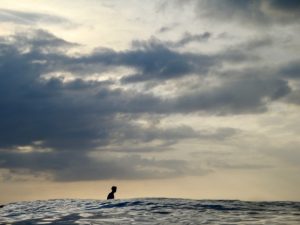 I recovered quickly from my couch crash, with laughs and a solid night’s sleep. Over the next few days, we rocked in hammocks, drank coffee, ate good food, and most of all, headed to the beach for swimming and surfing.

I don’t surf. With some scary water-related incidents in my past, I struggle whenever things feel even slightly out of my control. In Panama, I started getting panicky when waves were knocking me down.

My son, Beau, kayaks and surfs with dedication and zeal. He’s an accomplished whitewater paddler and has been surfing Maine waves this winter. It wasn’t surprising that his approach to water – and to scary things in general – was drastically different than mine.

On a regular basis, his way to calm led from his body to his brain, not the other way around. It was not an intellectual exercise. It was practiced intuition that one sees frequently in extreme athletes. 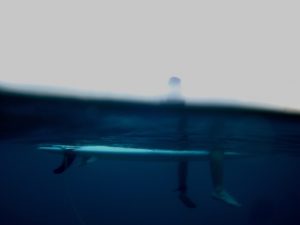 “You start by relaxing one part of the body. Like closing your eyes and relaxing your head and neck. You can acknowledge that it feels more comfortable than the alternative. Eventually, it gets easier being in stressful situations,” he told me.

Since he was a teenager, Beau has honed this technique. He learned from watching more experienced kayakers. When faced with activities which might bring on panic, he didn’t like the feeling of tightening up. Feeding off negative emotions of struggle and panic didn’t work. He’d get worn out and stressed. Instead, he practiced relaxing.

“I can fall into the flow. Ultimately, the waves are bigger than you. The rapids are stronger. The only way to get through is by relaxing,” he said. “Everything I know about panicking is that it gets you nowhere.” 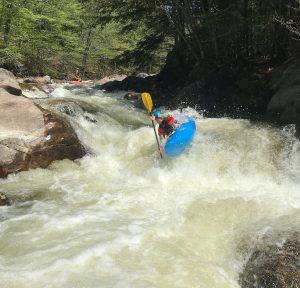 I have work to do. As a 56-year old, my behavioral patterns – good or bad – are like well-worn cobblestones. The territory ahead, neurologically-speaking, involves bushwhacking new paths and resisting the old avenues. Flow seems elusive. Relaxing when things are out of my control: is that possible?

My project horses, Bug and Barry, have similar journeys ahead of them. Their past mistreatment and poor trainer history manifests in braced necks and shoulders. I’ve been working with Amy Skinner to create a safer, more enjoyable, more relaxed existence for them. I expect this will help them become safer, more relaxed, more enjoyable riding partners.

As we exchanged videos, Amy explained her strategy: In essence, the body can be trapped by the brain’s set patterns. The one-time brace of years ago has become an auto-brace. We want to unlock the physical patterns that are tied to the brain’s wiring. We are working to undo the auto-brace through new movement.

One exercise involves rubbing their tight necks while leading them at a walk. In this way, they can eventually feel how much better it is to walk without a brace. Over many sessions, Bug and Barry are learning that a lowered head and a relaxed neck feel better than the alternative.

Like Beau’s strategy, it is almost counterintuitive: change the body to change the brain. Introduce new movement to affect changes in neurological patterns. A trickle-up approach. 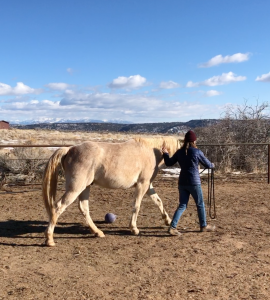 Barry relearns to lower his neck while being led.

Since we were enjoying some success in the paddock, I decided to take Barry out on the trails. I rode my mare, Shea, and led Barry over five miles of backcountry. Afterwards, I reported back to Amy. I was dismayed: “Barry was a nervous wreck. He held his head high and startled at nearly everything. Only a few times did he lower his head. He did it once when I rubbed his neck; he lowered his head, gave a deep breath out, and licked and chewed.”

She said: “That’s good! That’s a successful outing. All the nice work you can do with young, undamaged horses is not like what we have here. We’re looking for that one percent, that small but successful part of a session. You were able to unlock a physical pattern as a way of getting to the brain. That marks progress.”

Getting better involves finding the scary thing, the brace, the resistance, and chipping away at its roots. The journey calls for an improved connection between brain and body. I’ll undoubtedly fall off another couch and panic again in the waves. Barry will stiffen his neck and carry his head high. But baby steps and one-percent moments still count as progress. 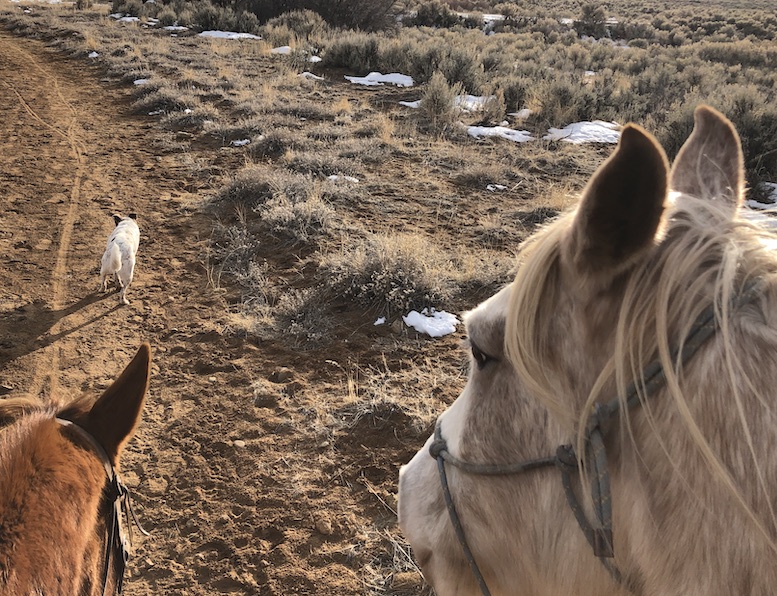 On the trail with Barry and Shea