Editor’s Note: Randy Winter is an experienced endurance rider, an active horse community member, a Best Horse Practices Summit sponsor, and creator of Rein Safe. He sent this report from his home in Boulder, Colorado, which the Middle Fork and Marshall fires narrowly missed. Those fires forced the evacuation of 35,000 people and destroyed 900 homes.

Read about East Canyon evacuation. No Time to Think. 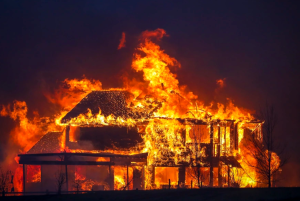 December 30 was quite a day. The wind was howling. Around 11 am, we saw emergency vehicles go by and saw smoke just west and south of us. A friend lives directly in that area and she kept us posted on the progress of what would quickly be named the Middle Fork Fire. We prepared to evacuate. The fire roared past us to the south.

Fortunately, fire crews got this fire under control quickly. But then we started hearing about a new fire, dubbed the Marshall Fire. This fire was 15 miles south of us. We had winds of 80 mph.

The National Renewable Energy Laboratory (NREL)  is located in this area because of high winds generated by the terrain. Huge wind turbines dot the landscape. Winds funnel down through the canyons like when you put  your thumb over the end of a hose to increase the distance of water spray. The Schnook winds can be fierce as they travel west to east coming down out of the Rockies.

Officials recorded winds at the Marshall Fire over 100 mph. This fire pushed at high speed into the populated area of Superior and just grew and grew. That evening, as it became dark, we could see an orange glow on the horizon. Really eerie.

High winds are not uncommon around the Boulder area. What made this wind event terrifying is that we have been in a drought, one of the driest six months on record. Grasses are tinder dry. And as people in wildfire areas know, any spark can escalate into a full blown wildfire driven by the wind. 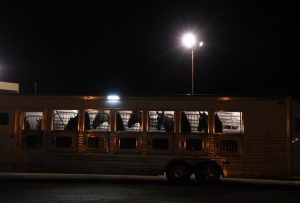 It’s times like this that we’re grateful to belong to a strong, supportive community, our “Horse Community.”

Now, one day after the fire, we are hearing of how the equestrian community came together to help each other and horses. Government agencies, non-profit organizations, barns, facilities, ranchers and individuals all immediately came forward to save and care for our horses.

The official evacuation center for the horses was the Boulder County Fairgrounds. Sadly, it wasn’t Boulder County’s first rodeo getting horses evacuated. The Fairground’s staff and volunteers have the routine down. It is organized! They identify and record all the animals (phone cameras aid in this). They record where they are located at the fairgrounds and who the owners are. Food for the staff, volunteers, owners and horses is generously donated by the horse community and community at large. The capacity of the Fairgrounds is limited and filled up quickly. Other facilities, like the Jeffco Fairgrounds, opened up to accept evacuated horses.

Word of mouth is a huge way for people to connect and get help. Texts, emails, phone calls, social media and personal visits were all used to help horse owners, to coordinate efforts, and to make the rounds. Evacuation plans were put into motion by barns, individuals and non-profit agencies, like the Boulder County Sheriff’s Office Mounted Search and Rescue. The mental relief of knowing that the horse community is out there for all of us is something we can all be proud of.

Social media played a huge roll. On Facebook, the Boulder County Horse Association, Boulder Equestrians on Trail, Top Horse Trails & Camps Colorado and barn groups, all had information about the emergency. I’m sure there were more! No matter the discipline or barn association, managers of facilities as well as trainers reached out to their networks to see where they could be of assistance.

I talked with Sean Davies, owner and trainer at Spirit Heart Ranch in Erie, just east of the fires. His day started evacuating horses in danger from the Middle Fork Fire. Word-of-mouth networking for him is extensive since he is a well-known trainer. Many small networks of equestrians overlapped with his group and he spent the day going from client to friend, to friend of a friend, or friend of a client, to facility and barn, loading and transporting horses.

Often it took his expertise as a trainer to get horses into trailers. He stressed the importance of having a plan and being knowledgeable about loading your horse and understanding what to do if, in the panic and confusion, a horse would not load.

A facility directly in the path of the fire had to make such an emergency decision. It sat a half mile or so east of the foothills where the Marshall Fire began. The blaze came so fast that the owners had no time to evacuate the horses. They just let them loose on the open areas adjacent to the facility. The latest is good news: the released horses have been found, are safe and are being taken to graciously offered homes.

Sean mentioned the importance of putting identification on your horse in such a situation. Put your phone number on the horse using a grease pen, use duct tape, tie tags in manes and tails and more.

Offers of help continue: the Colorado Horse Rescue is offering free blankets for horses that are now in an environment they are not prepared for. Offers of hay and boarding are pouring in. I know there are many more stories out there to be heard. I’m hoping most of them are happy stories. Thank you to the horse community that comes together in times of need. This all for the sake of our horses.

I shot this photo in the small historic town of Superior when the Marshall Fire was just starting to rage. I have been amazed at how many people have seen it and responded to it. I think with wildfires when people see animals involved we all feel a sense of helplessness for that animal knowing it can’t ask for help and is unaware of the danger it is in. Many were concerned about its welfare.

Patrick, my husband, and I tried so hard to get it on a dog leash….that was all we had available to us, in hopes of being able to lead it to safety. It was heartbreaking to see a scared horse knowing that fire was bearing down on us and that area. We tried for 10 minutes as long as we could safely, but to no avail. He was just too skittish and wouldn’t let us near him. We had no choice but to leave. We felt absolutely terrible having to leave without the horse. But since I posted this photo a few days ago I wanted to share that the horse was found by a sheriff deputy and taken out of the fire. Miraculously! His name is Willie. The owners emailed me to let me know that he was safe and sound. I was so glad to hear this and even more amazed that the horse survived given that practically the entire downtown historic district burned to the ground. Amazing work by the deputies which saved him. I wish I knew who they were. I know I am grateful and so are the owners of Willie. I wanted to post some small tidbit of good news from this terrible tragedy where so much was lost. 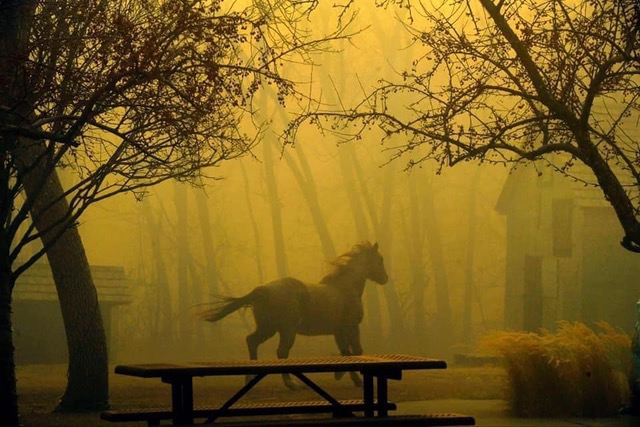 Read about East Canyon evacuation. No Time to Think.