A steak-tasting discussion and stockmanship conversation? What’s not to like?

Several dozen ranchers headed to Spring Hollow Ranch and Equestrian Park in Hesperus, CO, for a National Cattlemen’s Beef Association event on Stockmanship and Stewardship. Curt Pate and Dr. Temple Grandin were among the presenters.

Sadly, I missed the presentations on low-stress stockmanship, but was happy to hear Grandin’s talk. The Colorado State University professor and past Best Horse Practices Summit presenter is as spry as ever; she turned 74 last month.

Like many people in the beef industry, Temple Grandin has legacy and sustainability on her mind. Her talk focused on how the industry needs to adapt in light of climate change and increasing pressure to be sustainable, relatively free from suffering, and positive for the environment.

“It’s not enough to prevent suffering,” said Grandin. “The question we’re asked is ‘Does the animal have a good life?’”

The CSU professor was undoubtedly aware of the PAUSE act, a ballot initiative that would have banned certain common livestock veterinary procedures and would have mandated cows live about five years. It was widely criticized by rural county commissioners and ultimately dismissed by the State Supreme Court earlier this year. Read more about it here.

In the Spring Hollow arena, Grandin said that all things considered, “cows have a pretty good life. Better than pigs and laying hens.” 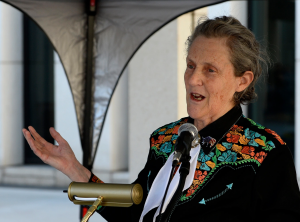 Like many ranchers across the country, Grandin has realized that cows can be part of holistic, regenerative, and sustainability conversations. Cows can improve the land by moving through pastures, pooping, and grazing. They can help reduce the spread of wildfire and keep down secondary growth. It’s this reporter’s observation that more ranchers need to learn about better practices and more consumers need to support those doing ranching right.

Jennifer Martin, an associate professor of animal science, led an interesting steak-tasting feature before dinner. Attendees were served samples of five different strip steaks; they varied by age and processing. Most were delicious; some more so than others. The sixth sample was unanimously disliked, even before presenters revealed its identity. It was “Beyond Beef” made of water, pea protein, canola oil, coconut oil, and rice protein.

Grandin signed off by praising the small beef producers in the audience. “Little guys innovate. They build programs and work on ideas. Fifteen years later it’s mainstream,” she said.