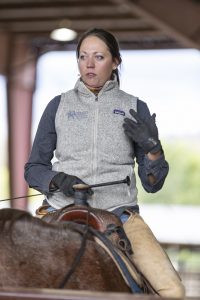 Amy Skinner will present at the 2021 BHP Summit

Editor’s Note: Amy Skinner is a regular guest columnist and has been a horse gal since age six. She will present with fellow trainer and rider, Katrin Silva, at the Best Horse Practices Summit 2021.

It was her first lesson and the woman must have thought I was crazy. She’d asked me for help with her horse who was dull to the leg and wouldn’t go forward. He was heavy on the forehand and plodding, with a cranky eye. I had just told her to slow her horse down, and while she was a good sport about it, I sensed she had some hesitation about making her slow horse go even slower. 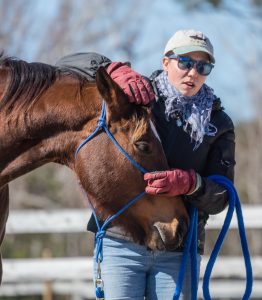 They’d had a rocky relationship with many fights over the years, she said. More often than not, he was sluggish and resistant until something bothered him and he suddenly came alive and could spin and dump her with mystifying energy. I explained to her that he actually wasn’t lazy, but that his resistance was one of tension and heaviness on the forehand.

I used my favorite Ray Hunt quote to begin the lesson: “First you get with the horse, then they get with you, then you go together.” I explained that their going forward had produced nothing but resistance. To begin again, she should find something she knew they could both do.

We began the slow steps. I explained to her how to find his front feet and to ask for slowing in time with his feet, so she could use the lightest rein aids possible. Within a few rounds, the horse was blinking, sneezing, and shaking his head in relaxation. He yawned several times. I explained that he was releasing tension and feeling validated. He was better able to listen to her. 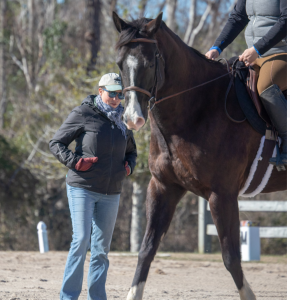 Then, we asked him to take longer strides. Not faster strides. This distinction is important because faster, tenser, choppier steps would make him tight and off balance. Lengthening the steps would produce better range of motion and balance. We asked for longer strides as he was headed toward the barn. I picked this spot because I was sure it would be easier for him. In no time, he was eagerly lengthening his steps and slowing them with less leg than she was used to using.

She could now lengthen the steps going toward or away from the barn with ease. He was more balanced than before, with less toe stubbing in the front end.

In years past, I’d have used some exercise to get horses to think less about the barn by making them work harder in that direction, and letting him rest when away from the barn. I would have addressed the dullness to the leg by using the least amount of pressure necessary but as much as needed. I would have “fixed” the problem, but chased other issues down the road to be fixed later:

Stiffness and lack of balance would have to be fixed. 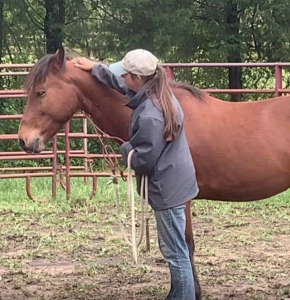 We seem to think that for riders to win, the horse can never win. We say and think: Do what I want or I’ll make you uncomfortable. Anything they want to do, we have to do the opposite.

I tell my students to imagine:

You didn’t want to take a lesson because you were tired or afraid or distracted. I react by making it harder for you to leave than to be here. You chose to stay, but reluctantly.

Simply listening to the horse, feeling their needs, and guiding them in a give-and-take isn’t losing. When we respect them, everybody wins. They want to be with us when they are more balanced and relaxed with every interaction, and we don’t have to make them choose between discomfort or greater discomfort.

Egon von Neindorff, a master of dressage who died in 2004 said: “Take any resistance the horse gives you and make it beautiful.”

This is my new goal with every horse. It has improved my relationships with them, and it has improved my students’ approach to their work. We look forward to riding more with less fighting, and more beautiful, balanced moments.