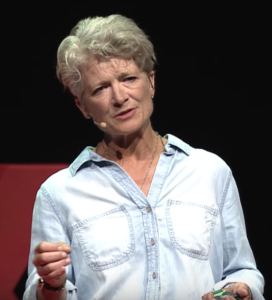 Nancy recently discovered body  work and gravitated to the Masterson Method, founded by Jim Masterson, a presenter this year at the Best Horse Practices Summit.

I started calling her Pissy Missy, beginning to think this is why people don’t want mares. I’m not exactly sure when it started, but I first noticed her hesitation when saddling or asking her up to the fence to mount. She would pin her ears. If I used two legs to urge her on, she stopped dead, tail flicking and act like her next move was, “I could pile you.” Then one day when I asked her to load into the trailer, she said: “Absolutely not.”

However, only really started paying attention as I checked everyone after a morning feed. She flattened me with a bite to the waist.

Holy crap! How much clearer did she need to get?

This, of course, isn’t as much about the horse as it is about me. While I’ve had some expression of ‘no way’ from other horses, this mare was starting to say it to everything. 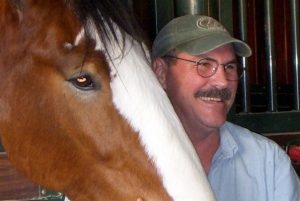 Jim Masterson will be at the 2021 Summit

I thought it might have been her teeth. Had them done yet her attitude continued to get worse. I brought her to the chiropractor. No changes.

Then, one day, as I scrolled through various posts about horse body work, something about the bladder meridian caught my eye. I will freely admit that this type of stuff had always seemed too woo-woo for me, but it was about -20C outside and an online course was under twenty dollars so I figured I’d nothing to lose.

The energy level of the presenter was so low, I had to play it at 2x speed. However, there seemed to be something to the idea that there are key spots where the horse holds tension. Through touch, you bring their awareness to that spot to allow them to relax and release.

A parallel for me is when I have trouble falling asleep, I often notice I am holding my head on the pillow. When I let go of that tension, sleep comes immediately.

I searched online and found the Masterson Method and watched numerous videos and got the book. The ideas were around encouraging the horse to relax a joint and the effectiveness of stretching and massaging to compliment the initial scan of a horse. It made sense. After all, I have to stretch a lot to keep my back in shape. 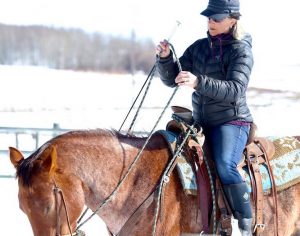 Prepared to block a bite, I began exploring with an oh-so light touch, quickly discovering the mare wouldn’t even tolerate that much around her withers. It took numerous tries over the past few weeks to help her relax and release to my touch. As her key tension area was under the saddle I have also added a layer to my saddle pad to help better distribute my weight. As she has softened, she has also relaxed at the poll and lateral work has become easier.

I realize despite all my experience, knowledge of horses, awareness of leadership skills, and understanding of the importance of listening, really listening, Molly still had to yell at me before I actually was able to hear what she’d been trying to tell me.

What I had seen as attitude and resistance was pain. She’d been trying to tell me all along in the only way she knew how. Pissy Missy no more, Molly and I have been making great headway. Yesterday, we easily hauled to the arena and she offered some lovely lope transitions.