For those who’ve not had the pleasure of attending the National Cowboy Poetry Gathering, an annual event run by Western Folklife in Elko, Nevada, it may be easier to describe it through metaphor: 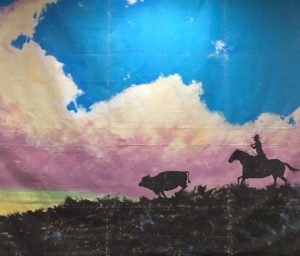 A stage backdrop in Elko

If the Gathering were something you ate, it would be tapas, snacks often offered as part of a social agenda, of getting together.

Held over seven days in the historic Nevada town, the Gathering is not one single event where you gorge on the talents of just a few artists. Rather, it is scores of small events, hosted and presented by dozens of talents from the Western states and beyond.

In this way, snacking is a wonderfully fulfilling way to go. The Gathering celebrates not just performance but the reunion of performers with their audiences and with their fellow artists. For one week in the middle of winter, the event turns the town into a sort of rollicking, mobile family reunion. The connections between artists goes waayy back, as does their rapport with fans. 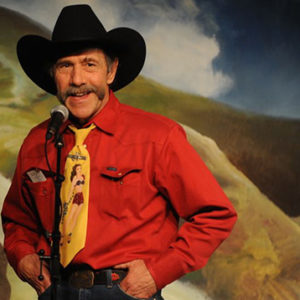 Over the years, poet Paul Zarzyski has recited “Making Her Day,” about an only-in-Montana shenanigan involving the delivery of two Pabst Blue Ribbon cans of beer to his favorite drive-thru bank teller by way of the drive-thru bank cylinder.

This time around, one of his fans presented him with his very own drive-thru bank cylinder.

The year’s theme was Storytelling. In typical Gathering fashion, the topic took many tangents in the form of panel discussions, a keynote address by Andy Wilkinson, and several sessions dedicated to specific aspects of storytelling. Wilkinson, a beloved writer, musician, and teacher at Texas Tech University, chastised the current climate of vitriol and antagonism. He offered attendees a way back to civility and a way out of the politically-charged mire:

“…[T]here’s but one way back to glory, o kith and kin, and that’s through story.”

Wilkinson helped capture the Gathering’s mission concisely when he said: “The principal business of art is storytelling. And the principal business of storytelling is to give us an understanding of the world that is distinctly human. The historian sees their view, even though it is ever-changing, to be the objective truth. The artist knows that the ever-changing nature of truth can only be captured in a story.”

Many performers and attendees leave behind present, real-life stories of horses, cattle, ranch hands, and cowdogs to be part of the Gathering. This is true for some of my favorite performers: Gail Steiger, Randy Rieman, Joel Nelson, Ross Knox, Amy Hale Auker (Steiger’s wife), Teresa Jordan, and John Dofflemyer, to name a few. Their year-round occupations and personal histories give ringing authenticity to their presence and purpose here. 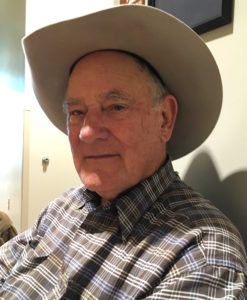 Jack Sammon, a talented gem from Murwillumbah, New South Wales, worked for years as a boss drover (stockman) on Australian cattle drives. One ranch he worked on spanned 170 miles from its northern end to its southern end, “with not a single fence line in between,” he said. It’s easy to get lost in that kind of vastness, he told the audience.

It’s easy to get lost and fall in love with that kind of work, too, said many performers.

It may be hard, dirty, poor-paying, bone-jarring, occasionally crippling work. But especially in today’s world, where folks are constantly plugged, wired, and stressed, there are some blissful advantages

As Gail Steiger recited: “The hired man on horseback goes laughing to his work.”

Couldn’t we all stand a job like that? And even if we couldn’t – the Gathering lets us take some of that notion home with us. It let’s us embrace the idea and the lifestyle.

Teresa Jordan, who grew up on a Wyoming ranch before attending Yale University, lent a wise, female perspective to a session, titled “Let the Mystery Be” (the title of a brilliant Iris DeMent song). As a girl, she was used to spending plenty of 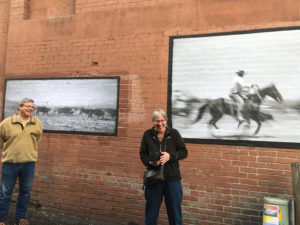 time alone and plenty of time with animals, she recalled. She’d often ride out from the ranch with men and boys. But when a girlfriend visited, the two would head out with a different mindset. “We would be the horses. There was this sense of transcendence,” she said.

Judging by the crowd’s response, it was an appreciated attitude.

At a morning session called “Coffee with the Cowboys,” performer Gail Steiger openly addressed the climate of discord which seems to blanket the country of late. He remembered the 1983 invasion of Grenada and said, “I turned off the TV and left all that nonsense behind…We disagree on some things, but we don’t disagree on everything.”

Fellow performer and working cowboy Rod Taylor nodded his head and chimed in with a song from his group, the Rifters, “…I got news for you. Let’s turn it off. Let’s go outside. The world is much more beautiful than the news implies…” Check it out here.

Out there in nature, of course, everybody and everything is just trying to get along.

And like healthy, delicious snacks shared with friends, the Gathering reminds us horse folks of what’s good in our lives. 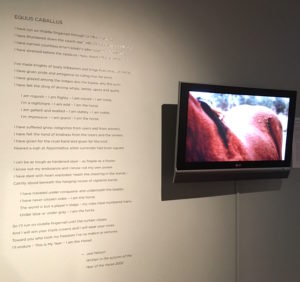