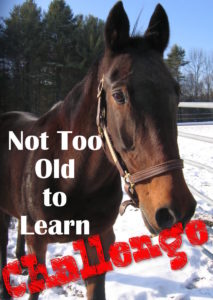 Progress comes in all shapes and sizes. It can be planned or spontaneous, pretty or pretty ugly.

Over the past few weeks, we’ve worked with Jolene at all of the above.

Read more about deliberate tips for working with a spooky horse.

Meanwhile, we had two outings that helped build Jolene’s confidence in a more spontaneous manner. 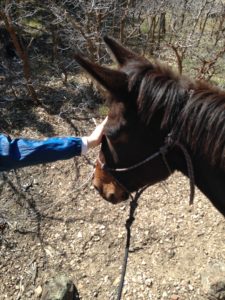 I rode Shea and ponied the mule on an easy, afternoon ride. Along the way, we met a neighbor. She innocently stepped forward and reached to pet Jolene on the head. This is an event that normally would send Jolene into the next county. I dallied my lead line and braced for a mammoth tug from the thousand-pound girl whose middle name is Distrust.

Remarkably, she stood firm. Her quick breaths told me she was nervous. But our friend was gentle and soft-spoken (which, I believe, made the difference). As her admirer stepped back, Jolene licked her lips. 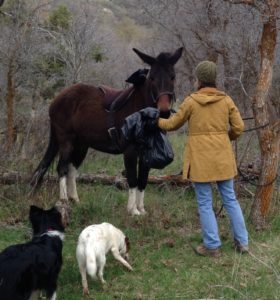 Jolene gets used to trash bags full of cans

Since certain crummy horse riders like to toss beer cans on the trail, I’ve placed two containers for trash in the area. Periodically, they need to be emptied. (You can read about my initiative here.)

In both cases, Jolene did great!