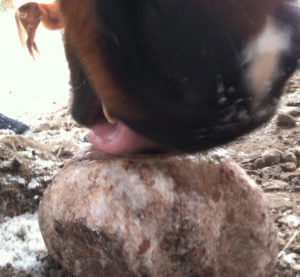 On the surface, you might be tempted to say, “Salt is Salt is Salt.” It’s such a humble, ho-hum commodity.
But we live in a world of consumerism and we have choices galore. There are inexpensive, synthetic blocks. There are pricey, Himalayan blocks from 7,500 miles away. There are Redmond Rocks.

For the last several years, NickerNews & BestHorsePractices have enjoyed a healthy partnership with Redmond Minerals. The Utah company has generously donated products (the popular Redmond Rocks, Daily Red, Daily Gold and Real Salt for us humans) in exchange for some positive public relations.
It has been a nice arrangement. But recently I discovered there’s a whole lot more to like about this company.

According to an Inc Magazine feature, “Redmond doesn’t have an organizational chart, titles, or even job descriptions, Instead of pigeonholing people into jobs, Roberts believes everyone should have the chance to stretch into new roles and learn.” Read the article. 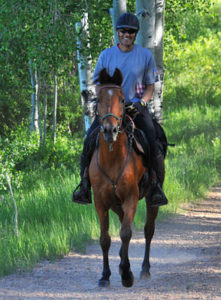 Mike Mumford is my main Redmond contact, helping to keep NickerNews fans happy with product giveaways. The gentleman is no pencil pusher. Before moving to Salt Lake City, he served in the British army , ran a successful business in England, and competed in the Olympics as a Modern Pentathlete (riding, fencing, swimming, running, running). Now, he and his Arabian excel at endurance riding.

While leading a tour of the Heber City plant, Darryl Bosshardt compared the natural spectrum of minerals in Redmond’s salt to the nutritional components of a garden tomato. No matter how hard scientists try, they’re just not going to match the beautiful perfection of a good-tasting tomato. Nor will they match the subtleties of ancient sea salt.
Manufactured blocks might have up to six ingredients: salt, manganese, iron, copper, zinc, and iodine. Redmond salt has those components plus dozens more, including potassium, selenium, and magnesium. 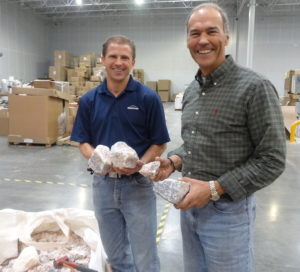 Interested in trying it and/or having your horse try it? Enter here, please make sure to leave your US mailing address.