Ever since the Unbranded team of four Texans and their cavvy of mustangs wrapped up an incredible 3,000-mile journey nearly two years ago, fans have been chomping at the bit to see how the crew’s 500 hours of footage got whittled down to less 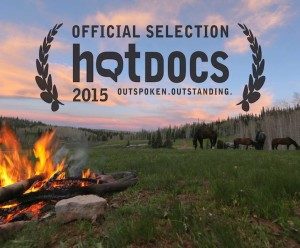 than two hours of WOW. Watch the trailer here.

Followers got a bit closer today, as Unbranded team announced the acquisition of the film by Gravitas Ventures. Finally, it will be available through Video On Demand format, September 25. You can prepay for it here.

Meehl, who produced the award-winning Buck, a documentary about Buck Brannaman, said she hoped fans would work through Tugg, a platform allowing groups to bring requested feature films to their local cinemas.

She agreed that the public’s demand and response have both been more enthusiastic than what’s usually seen from typical indie film audiences. It’s similar to what she experienced with Buck, when she learned that horse owners and lovers are some of the more fanatic documentary watchers.

“It’s been shown at just two festivals and it’s won both,” she noted.

“Unbranded is breathtaking in both scope of what’s been accomplished by these four young men and in how incredible the settings are throughout. We know audiences of varied backgrounds — from families to animal lovers to just documentary and film fans — are going to enjoy this remarkable adventure,” said Nolan Gallagher, Founder and CEO of Gravitas Ventures, in a statement.

Viewers will also be able to see it digitally, at home. DVDs will be available before Christmas.

NickerNews and BestHorsePractices have more Unbranded coverage than any other media outlet. Check out all the offerings here.