The Muck Boot Winter Warrior Contest is over. Thanks to all who participated! Check out the slideshow here.

Some of my personal favorite images and comments came from Barbara, Debbie and Doris. Three tough gals, for sure. All will be receiving small consolation gifts from NickerNews and BestHorsePractices. 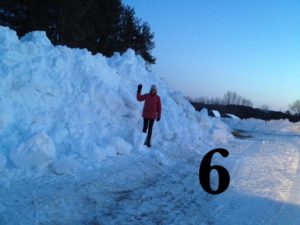 The winter of 2015 in Maine has been ridiculous:

1.  I had never seen frozen eyelashes on my horse before, but even then, they were hard to see through the 1mm slit between my neck warmer and hat.
2.  Generally, the path to the muck pile is plowed for me, but I’m pretty sure that the pile has subsequently spread into the next county.
3.  The paddock has been plowed three times so my aging horses don’t have to fight the snow; but I still have to shovel the Dutch doors that are so great without snow.
4.  And there are the mornings when I have to snowshoe to the barn, shovel out the sliding door to get in, shovel the stalls, hope that the plow cleans up the path 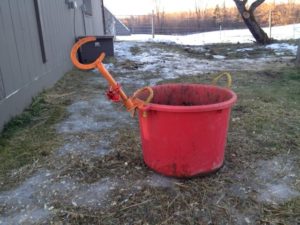 to the muck pile, shovel the doors to let the horses out, snowshoe home and shovel the walks and path to the woodshed, then to be greeted by my husband, “What have you been up to this morning?”
5.  When I open the door to the barn on those minus ridiculous mornings, the warmth that condenses from my 28-degree barn looks like I just stepped into the local laundromat with all dryers working.
6.  Cleaning the paddock poop is another challenge- I cannot use the wheelbarrow but have a worthy substitute (see photo) and a pulp hook manages to dislodge frozen piles.
7.  The picture of the snow pile says it all, though honestly, I had a loader move some of the snow away from the piles that have fallen off the arena roof. 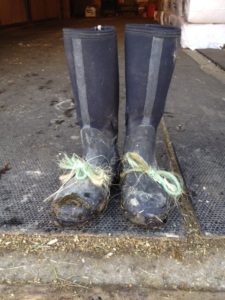 8.  I love my Muck Boots, but the tread wears off faster than the boot.  After a couple of impressive falls, I tied on some “cleats”…  Yankee frugality (not sure how frugality and horses work together though)
9.  I’ve wondered if my horses get ice cream headaches from the frozen carrots.
10.  I used to laugh that my grandfather wore long underwear inside and outside the house from November through March (ahem….)
11.  My barn clothes and town clothes have become interchangeable, that is, I only wear barn clothes into town and feel no embarrassment.  The benefit of the cold is that if you move fast enough, the clothes don’t smell like the barn, which some people consider offensive. Just don’t stay in a heated shop for too long. 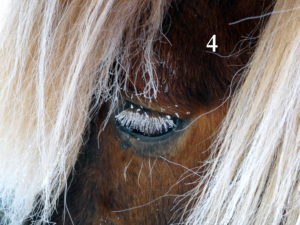 I am attaching a few photos that I have recently taken. My “camera,” which some people actually call their phones, has had a rough winter, too. I have been handicapped in catching some of those Kodak moments, while dealing with the lens fogging as quickly as I dig it out from my multiple layers of clothes and exposing it to sub zero temps. The battery also finds these temps offensive and goes into sudden death mode! I just love the message that flashes on the screen telling me that my camera has “overheated” and must cool off before use! I am assuming that my phone must have been manufactured or programed somewhere far from a Maine winter

Here are the photos: 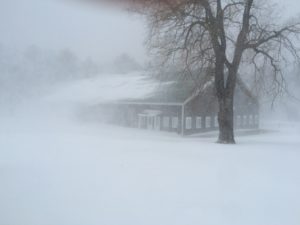 The Blizzard White Out was taken from the house looking at the arena. It was our first blizzard of the season. There were moments when I thought I might have to run a rope between the house and the barn so I could find my way between them.

Icelandic in His Element is a photo of Megas, one of our three Icelandics. Their general attitude toward cold and snow is very laid back. They tend to plant their rumps into the wind and enjoy the weather. 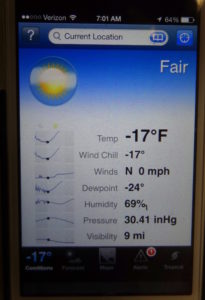 The photo of my  iPhone with -17  showing on local weather was  a particularly balmy morning. There was no wind chill to factor into the equation, so life was grand!

Sassy at Last Call was taken the evening of a blizzard. It was really The Tail End of a Storm in more ways than one! It is also a reminder of the beauty that exists 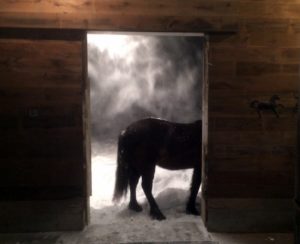 in the belly of the beast of a Maine winter.

Snow Bank at Back of Barn was my challenge to carve 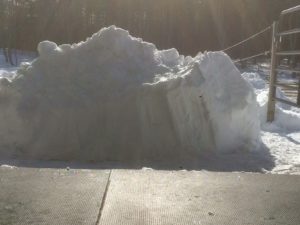 through in order to get to the manure bin. Wind driven snow pack found the morning after a big storm just added to my exercise program. No need to count calories in Maine this winter!

When both humans and horses have icicles on their eyelashes, you know it’s cold outside.  I thought they were pretty on the horse, and made sort of pretty light fractures in my eyes, as I chased frozen pieces of poop around.  I particularly like it when I’m prying poop up and it suddenly flies free and hits me in the aforementioned eyes (NOT!).  One day, one went into my mouth (almost.) 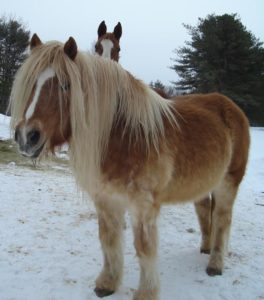 I’m on my second pair of Yak Traks this winter.  They fit nicely over my Muck boots, which keep me quite warm, even after taking 2 + 1/2 hours to clean the run-in shed after the blizzard.  So, navigating the paddock is not so bad.

How high are my snow banks?  Well, they are in competition with my muck pile, to which I now have to throw the muck over my head to reach the top of the pile.  If this snow was not so soft and fluffy, my horses would be stepping over the fence.  My husband plows out an area in the paddock to give the horses some room to move around.  Consequently, the snow banks are as high as the eave of the roof.  Because of the location of the run-in and the northeast winds, after each storm, we have about 4 feet of drift in front of the hay storage.  More shoveling before I can even feed hay!

How high is your muck pile?

I rigged up his rope halter, so I had reins and led him over to the round  metal feeder, climbed up on it, and climbed onto him.  I immediately discovered I had no control over him, as he proceeded to run around the feeder which sits under a tree with low branches.  I clung to his neck for 3 turns.  I managed to get him out into some deep snow, but he spun around and went back around the feeder.  Coming around the other side, we ran into my mare, who acted like a lion was chasing her.  Harley believed her and spun around again, throwing me off – not into deep, soft, powdery snow, but onto icy hard-packed snow.