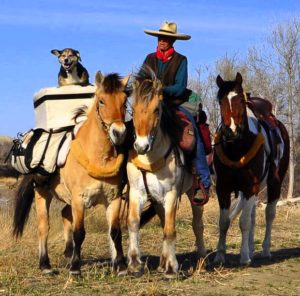 NickerNews premiered Bucket Lists a few years ago.
Since then, dozens have posted their goals and dreams. Bucket Listers look forward to riding in the Grand Canyon, volunteering at the Olympics, camping in Acadia, and riding on the sand hills in North Carolina.

In researching Unbranded and similar treks, we’ve come across additional riders with some big dreams and heady accomplishments. One stands out:

Since 2005, she’s ridden 18,000 miles across North America. Ende, a retired teacher, has completed major treks from Montana south to Texas, and north to Canada. 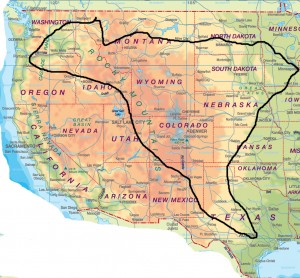 “See those peaks up there? It’s like they’re saying, ‘See if you can come up here.’ One peak leads me to the next, and I want to go on.”

Her scariest moment:
She recalled a mustang stallion who tried to steal her mare and get rid of Ende.
“You’re constantly riding that wave of uncertainty,” said Ende. “The ride demands my skill, attentiveness, and caution or I’d be dead.”

Posted in Dogs and Horses, General, Horsemen & Women, On the Trail, Reviews and Links and tagged Bernice Ende.