Blackfish is this summer’s hot documentary. It’s a movie about killer whales and how captivity makes them miserable and crazy. 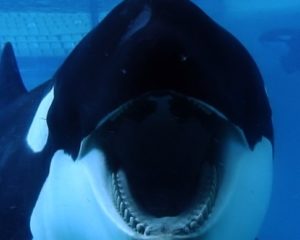 It’s an easy concept for us horse owners to understand.
A recent Los Angeles Times piece suggested humans should get out of the whale captivity business. These animals, like so many animals, need their herd and they need their freedom. Migration over thousands of miles is built into their biology and their being.

“Killer whales form close-knit, lifelong family groups… They travel long distances in a day and are extremely intelligent. Marine parks are not aquariums that exist to rescue and study animals in humane environments and to educate the public. They are high-profit water circuses in which intelligent ocean predators have been forced into unnatural lives.”

The vital role of family and freedom resonates with horse owners. We know that the more space we give our horses, the better off they’ll be. And that to be with friends and family is essential.
The more we constrain their movement, the more stressed they’ll be. They may not kill us (like captive killer whales have been known to do), but their stress will express itself in stereotypies, raised cortisol levels, abnormal behavior, and physiological issues.
And it’s the same deal with keeping horses isolated. 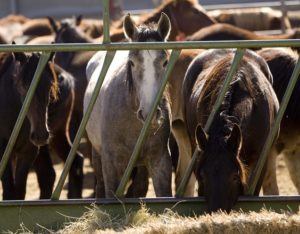 These are simple animal priorities. But in our zealous attempts to control them and create human-like living arrangements, we overlook the fact that they are not humans. We forge ahead and then wonder why we have troubles.

With their behavior, ‘difficult’ horses are simply saying, “Let me be a horse.”
And the whale is just saying, “let me be a whale.”