Report from the National Cowboy Poetry Gathering in Elko, Nevada: 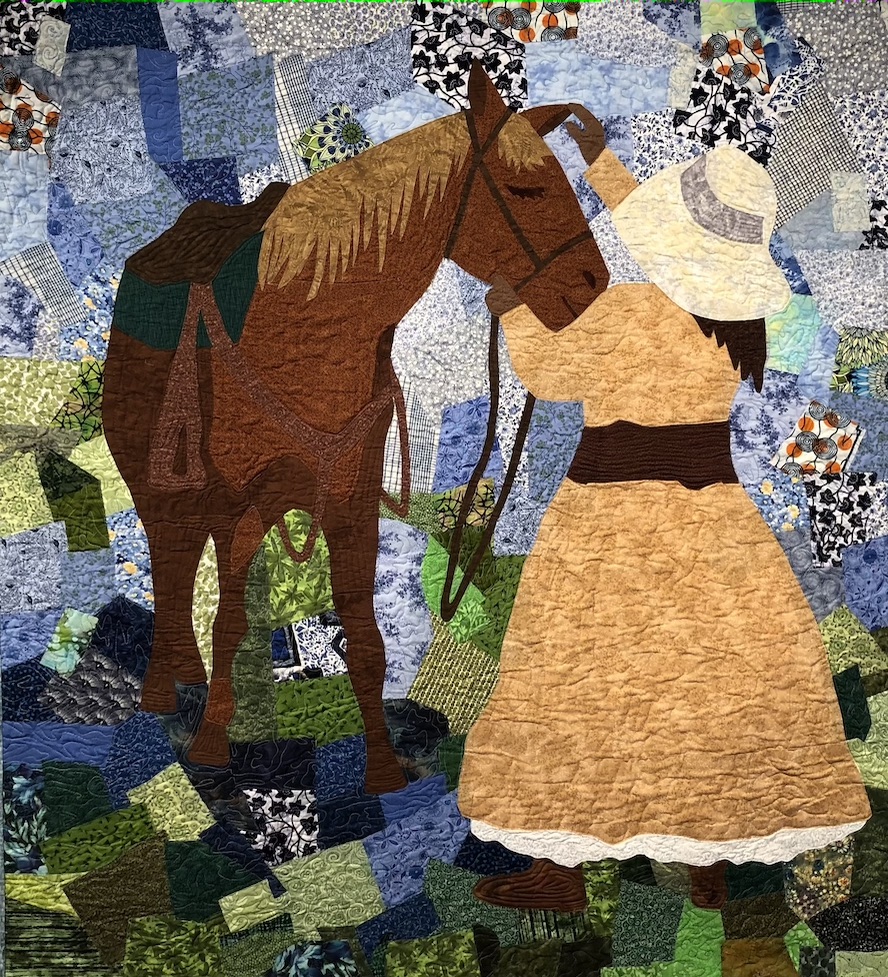 One of Marion Coleman’s quilts exhibited at the Western Folklife Center, celebrating Black Cowboys, the theme of this year’s festival.

We know horses grow and learn if their lives have a decent balance of comfort and discomfort. Without change and a little bit of uncertainty, there is no release and relief. There is no licking and chewing.

Read more about Elko and the NCPG here.

If the 2020 National Cowboy Poetry Gathering were for horses, there would have been plenty of licking and chewing going on. Again, for the 36th year, Western Folklife put on a festival that blended new and old performances in a vibrant, not-without-its-surprises kind of way.

My favs – Paul Zarzyski, Joel Nelson, John Dofflemeyer, Randy Rieman – stayed true to their brilliant form. And younger acts stepped up, like Andy Hedges (who has, in fact, performed at many NCPG’s but still looks 29), An American Forrest (Forrest Van Tuyl), Cat Clifford (an Oglala Sioux who performed in two movies, The Rider and Songs My Brothers Taught Me), and Trinity Seely (another veteran who nonetheless looks like a teenager). 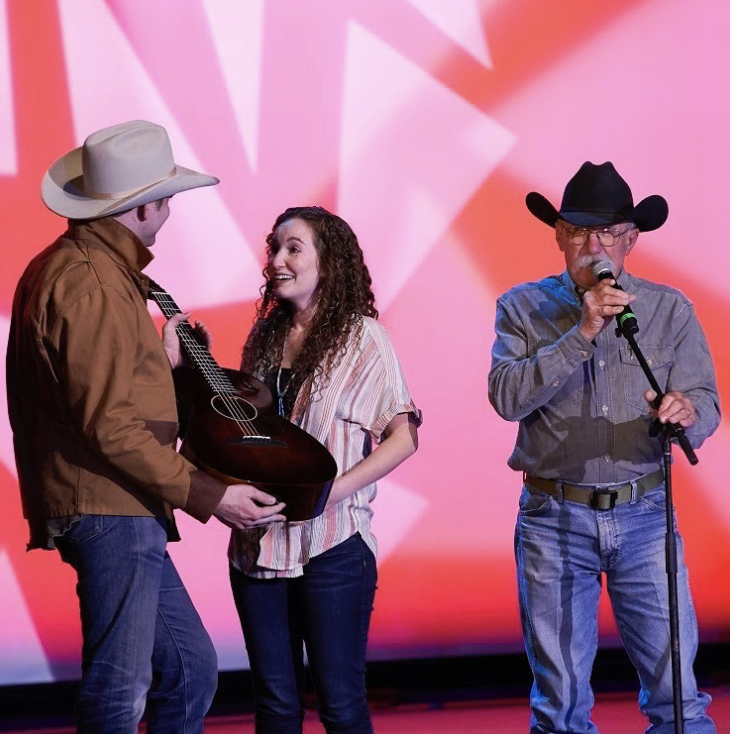 There was a priceless exchange of old and new at the evening celebration of Don Edwards, the Grammy-nominated cowboy singer. A group of generous friends got together and quietly bought the Santa Cruz custom-made Don Edwards guitar, offered in the Western Folklife silent auction. The striking guitar, valued at about $6,000, was then given to Edwards’ granddaughter, Lauren Padgett, also a songster, who performs with Ebb & Nova, a Maryland-based band. Surprise, support, love, music, good humor.

The keynote address provided licking and chewing moments, too. Why? As Western Folklife’s executive director, Kristen Windbigler told the crowd with a wry smile, “You know how I love surprises…” Last year, the Elko High School Marching Band, complete with color guard, introduced the keynote with “Ghost Riders in the Sky.” This year, the scenic crew wheeled a circa 1940 Chevy truck, among other props, onto the stage. About a dozen presenters took part in the 80-minute address. It included Derek Knapp, an Army veteran who served in Afghanistan and now runs an equine program for combat vets, Ghuan Featherstone, a horse trainer and community activist from inner city Los Angeles, and Bryan Neubert, a Dorrance protégé.

A Jeopardy question/answer aired during the Gathering. Photo by Mark Stevens

Neubert, who broke his leg in a November horse accident and spoke while seated,  connected with Bill and Tom Dorrance around the same time he headed to college. But, he said with a smile, “I was careful not to let college interfere with my education.”

I had to be careful not to let presentations interfere with my visiting. I’ve been making the midwinter trek to Elko for almost a decade. Increasingly with each year, I allow for spontaneity instead of frantically rushing to one performance or another. I have acquaintances to visit with – from Craig Krzycki, the amazing elk antler craftsman from Montana, to Marek Bennett, the artist and educator from New Hampshire, hat maker Chaz Mitchell, and so many more. There are meals and coffees to share and glasses to lift.

I was honored to join Neubert, Rieman, and Maria Lisa Eastman in a panel discussion of “Horses & Riders” in the G Three Bar Theater. It was fun to insert some science-oriented ideas into the conversation of horses in the 21st century. 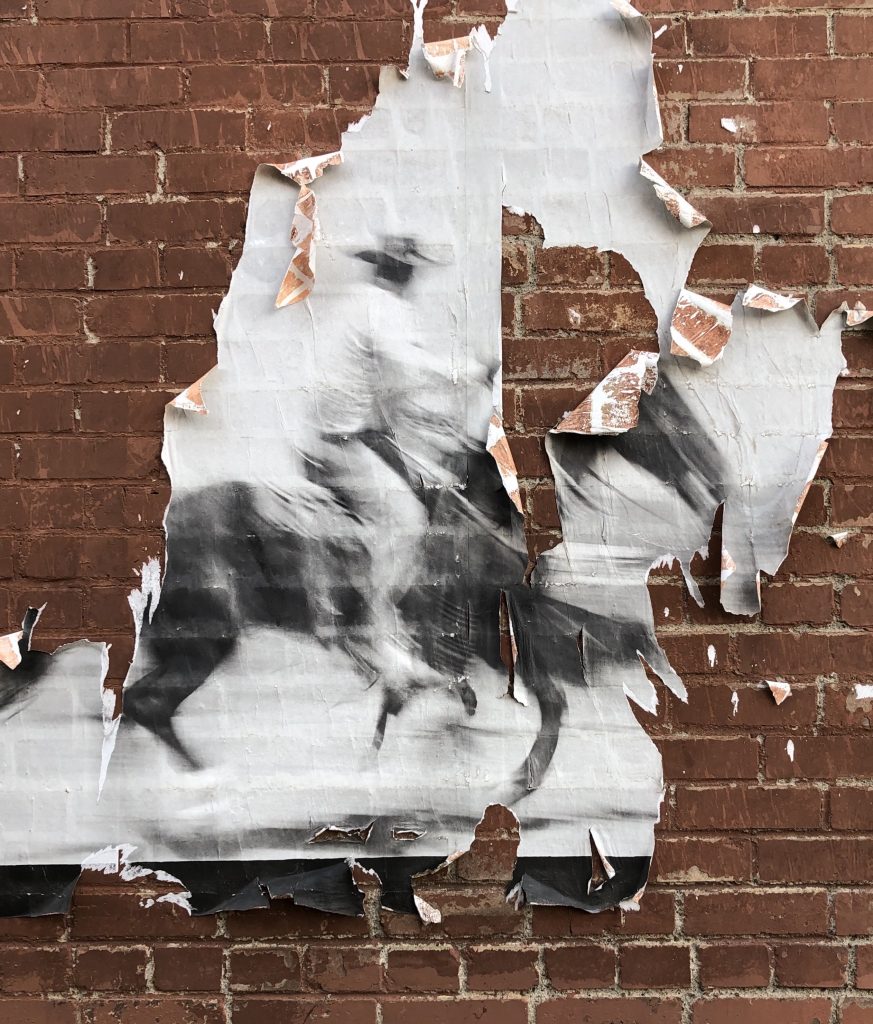 Elsewhere, I loved visiting with Nicole Grady and Justin Reichert, who run the fabulous Outside Circle Show, an all-night show of mostly working cowboys and girls at the renowned Star Hotel. I chatted with Mike Beck and Colter Wall, who spoke humbly and signed my NCPG poster. (Honestly, I could hardly contain myself. The Saskatchewan country songwriter drives in his own special lane. I so dig his music, his voice, and to have him take a moment to visit with me was pretty great.)

Those who go, know: there is an inevitable post-Elko funk in which you’re tired and weary from all the activity, celebration, and warm feelings of this annual midwinter gem. It takes a while to reconnect with real-world chores and to-do’s. But I caught up on sleep and took solace with another horse phenomenon: Dwell Time. 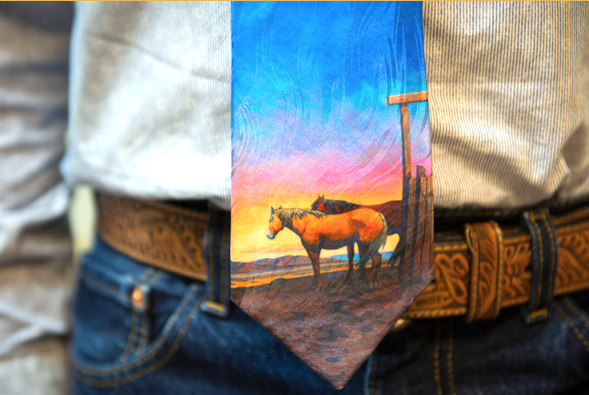 A tie worn at the Gathering. Photo courtesy of Western Folklife

Dwell time happens when the exciting moments drift away and you can reflect on what you learned, experienced, and appreciated. Good stuff to build on for next time. Mark your calendars – January 25-30, 2021.

Read more about Elko and the NCPG here