Editor’s Note: In the first installment of a multi-part series, we hear from Jeanette Hayhurst, a long-time and avid horsewoman from Barstow, California. Like many of us, she has continued to connect with horses, even when her age and physical limitations kept her from doing a lot of riding. Kudos, Jeanette!

I live in Barstow, California and have had horses for close to 40 years. I still enjoy taking my mare on horse camping trips with my girlfriends who are all members of ETI (Equestrian Trails, Inc.) Corral 66. But a few years ago when my hips started “complaining” about my long hours in the saddle, I started to look into driving. I asked for advice from a friend of mine who drives both Haflingers and mules. She said if she had it to do all over again that she would have started with a miniature horse that was already broke to drive.

I wasn’t all that attracted to minis because somehow I thought they weren’t “real” horses but boy was I was wrong. They are real horses, just in a small package. Throughout the years I have generally started my own horses but as I have gotten older the idea of buying something already broke sounded good to me.   So I made up my mind that I was going to check out driving a mini horse. 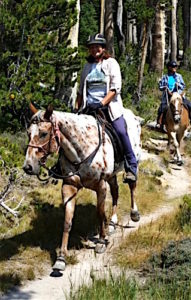 Taking some driving lessons was my first step. I recruited a friend of mine who drives and trains minis to help me out. First she started me out ground driving and learning the harness parts. (Of course, I had already watched lots of videos and read several good beginning driving books.) Then I moved onto driving her slower mini and then onto driving her high-energy gelding.   I realized I really did enjoy driving and decided it was time to buy myself a mini.

I used my trainer friend to help me sort through the internet ads that interested me. She knew I didn’t just want an arena horse and that I wanted to drive out on the trail for several hours at a time. Knowing this she made sure they were strong enough and that they had trail experience not just arena experience. Trust me, there were lots of unbroke little horses that appealed to me but she kept me on track. I finally found one that we both agreed on and she told me she’d go with me and evaluate him. So in August of 2015 I came home with Danny, a 10 year old class B mini (38 inches high and 350 pounds), a two-wheeled easy entry cart and two harnesses.

I took a few more lessons with Danny and started driving him all around my neighborhood and out on the power line roads by my house. I quickly found out he was a very “forward” horse. His favorite gait is canter! He is pretty brave but he can spook. I have a dressage background and realized that I needed to keep contact if I wanted to keep control. I made all the rookie mistakes but I was so grateful to have a trained driving horse to learn from. 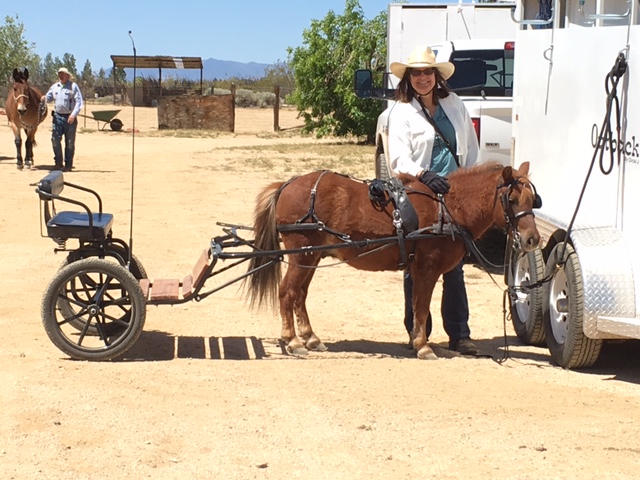 By November, I was ready to take Danny on his first group drive. The group included several carts, a couple of wagons and some outriders. Danny took everything in stride. The drive was only about 6 miles and we did fine. Two of the mules pulling one of the wagons were afraid of him because he’s a mini so we had to let them get used to us.   A few of the outriders’ mounts gave us a suspicious look too but they accepted us pretty quickly.

I learned that there was another wagon drive with ETI Corral 14 coming up in April so we signed up for that one too. Although it was an overnight we just went on Sunday for the short drive.   At this drive most of the wagons were pulled by full sized mules or horses.   I decided that Danny and I should stay in the back of the wagon train. I figured out that if any of the teams decided “run away” they would run right over the top of Danny and me with my little cart. This turned out to be good idea since there was a mammoth jack in training pulling a cart. Early during the drive he decided he was going to run off and leave the group but since we were behind him it wasn’t a problem.

After our successes I started thinking that Danny could do longer drives. I learned that Corral 14 holds an annual drive through Death Valley every November in conjunction with Death Valley 49ers. Some of my friends had done this wagon drive before and said the people were super nice and it was a great experience.   I asked myself, “Could we be ready in 6 months for a week long, 50 plus mile drive through Death Valley?” I decided to go for it. It would be a worthy goal and a great learning experience even if we didn’t make it this time.

Posted in Horsemen & Women, On the Trail and tagged driving mini horses.