Since many of us count animals as companions and friends, and since many of us have dogs, please Dear Reader, allow me to remember Belle and recount how she died this week. 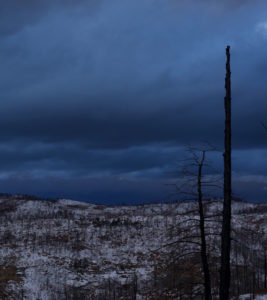 The Basset hound mutt with a yard-long body and short legs even made it into A Rider’s Reader. Notable as an independent spirit, Belle was her own dog.

On New Year’s Eve, as the day was fading into evening, Belle joined the rest of us on a walk down the road. The road is gravel, four miles long, and follows a north-south canyon with steep ridges on each side. Only eight homes have full time residents. It’s quiet, beautiful, and bordered by undeveloped public and private lands.

When we turned for home, it didn’t surprise or bother me that Belle wasn’t with us. She has a history of civil disobedience and I have loved her through gritted teeth. After all, she’s a hound and her nose demands far more attention than my calls ever did. In her 12-year old form, she’d also become a dawdler. She’d come home in due course. She’d stand at the door, give me that high-toned woof, and be let in. It happened every day, several times a day.

After an hour, though, we grew concerned. With my son, Cormick (home on college break), and dogs, I headed back out, into the dark and snow. We retraced our steps and took long detours into the juniper and scrub oak, using headlamps and calling her name. We followed the dogs as they picked up scents and dropped them. We listened. 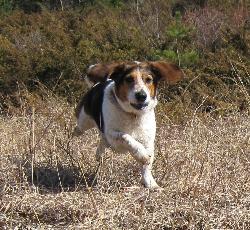 Belle as a younger dog

Over the last week, Belle had been rejuvenated by short-but-sweet visits from my three sons. She loved them and they loved her. Aside from me, she was the only being who’d journeyed these 12 years with them. They shared histories of porcupine and skunk run-ins, humid Maine summers by the ocean, long wilderness treks, and long cross-country road trips. While less than obedient in the field, Belle was an in-house ham. She would sit, stay, lie down, and roll over, often in rapid succession. She would bark loudly or “air bark” depending on the request.

When I’d last seen her, she was bounding like a puppy, big ears flapping. She’d caught a scent and was following it with obvious glee.

As the calendar turned from last year to this year, I tromped through brush and snow with a fading headlamp.

Could she have fallen into a drainage?

Could she have tussled with coyotes?

I checked the shallow ravines and watched for any sign of struggle. (Productively following her tracks was nearly impossible with our other dogs in the mix.) We searched by truck, too, covering the length of the road with high beams, stopping to call and to listen. 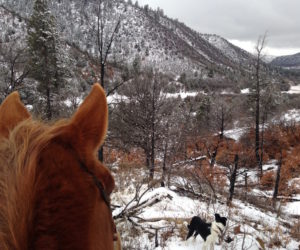 In the morning, I got horseback and rode the fields, checking streams and peering into the timber for any signs. The challenge of searching miles of snow-patched ground for a snow-and-dirt colored dog struck hard. I started thinking about closure, the need to know, and how I might never know.

The search had become something of a mind game. In the face of needle-in-haystack odds, methodologies of reason and intuition blend like chocolate syrup and milk. Doubt and determination ebb and flow.

The dogs, horse, and I continued to climb. Four years ago, a wildfire moved through the canyon. Scads of standing, charred trees remain. My white chinks streaked black.

We paused along the side of the ridge and I looked south across miles of country. Had the dogs not gathered to inspect, I might have missed her body, perfectly inconspicuous 15 feet down the hill. Belle looked asleep and almost unharmed save some blood on her side and her head.

Had she been shot?

Did she hurt herself and then die of exposure?

I took the towel from Shea’s back, wrapped her in it, and with Cormick’s help, carried her home, placed her in the bed of the truck, and studied her body. I called some ranching friends. Belle had rough puncture wounds above one eye and under her jaw. It appeared that her neck had been broken.

From all indications, I learned, this was a mountain lion kill. It had been quick and not motivated by hunger but more likely by aggravation. Belle pursued it and the cat had disposed of her. The image at right was taken by my friend a few miles away, earlier this year.

I’ve trained my dogs not to chase game, especially in the winter. They often wear electronic collars so if necessary they can be reminded with a tone or vibration that they must not bother the wildlife. Belle, I’d figured, didn’t need a collar. She’d grown too old and slow to be a threat. Most recently, she seemed to enjoy watching her buddies do all the running and playing. 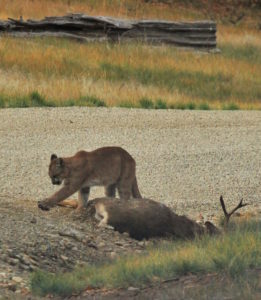 A mountain lion after a deer kill, a mile from our home. photo by Cecil Thurman

I don’t harbor any ill will towards the cat. (Though that might change if it gets a taste for domestic dog.) It was doing what cats do. Belle was being Belle. Living here requires a balance of considerations: respectful coexistence whenever possible. Mostly, I think us humans get it wrong. William Kittredge wrote about land ownership and stewardship as he reflected on the unwitting havoc his family wreaked on thousands of acres in southern Oregon. His people never owned the land “not in any significant way,” he wrote in Hole in the Sky: A Memoir. We’re all just passing through.

It took a while to dig through the frozen ground and shovel deep enough to discourage coyotes from rooting out her body. We buried her on a knoll above the house, under a tree. It was a spot Belle often chose to survey the neighborhood. I think the old explorer might have approved. 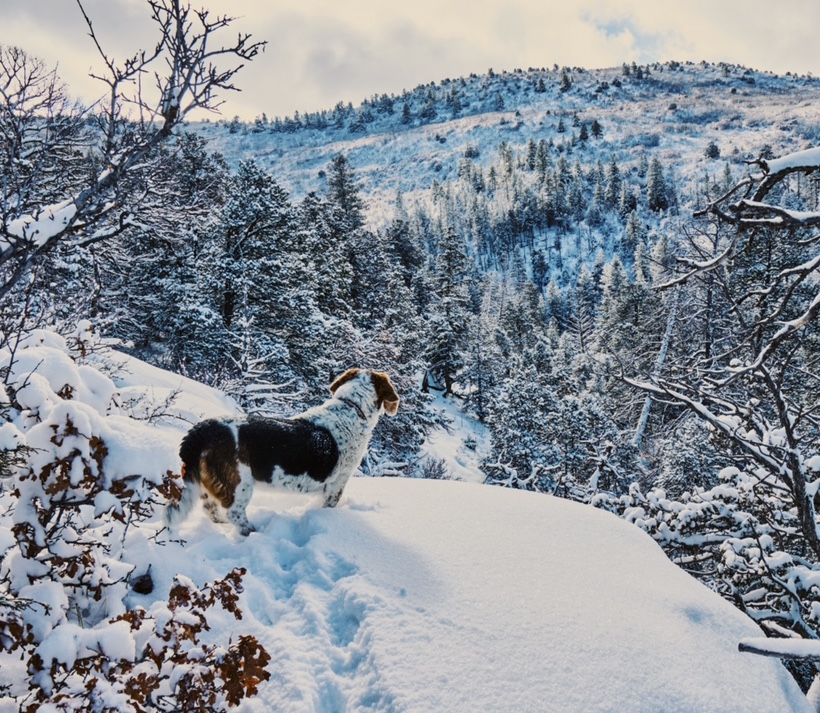 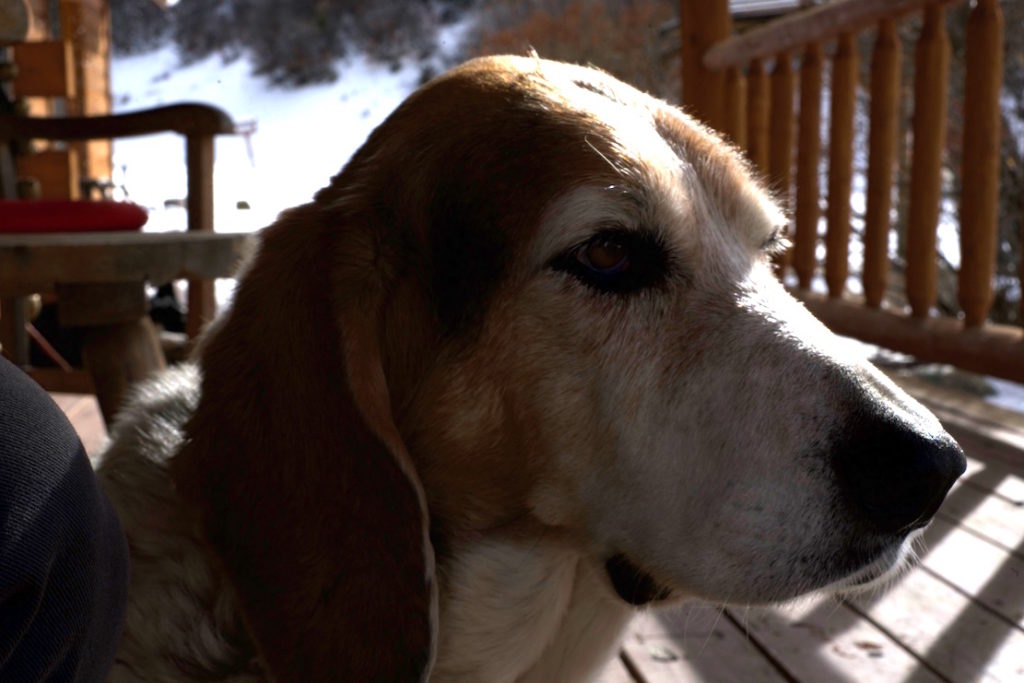 Posted in Dogs and Horses, Reflections and tagged Belle, remembering my dog.