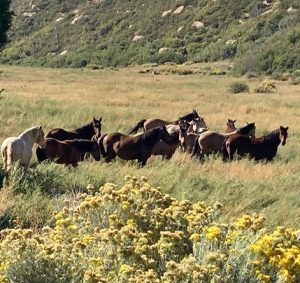 This fall, the National Mustang Association, Colorado partnered with Mesa Verde National Park in creating a new model for wild horse gathering practices. After habituating the horses to visiting a trap area with food and water, the group successfully captured 19 horses and moved them out of the park .

The horses were initially conditioned to water being brought by truck to a remote tank where eventually a trap was constructed around the tank. The horses quickly learned to enter and exit the trap at will for hay, salt and water.In September, the park successfully captured the horses by simply closing the gate.

The first band of 12 was of the Perlino stallion NMACO named Maestro. Some days later, the park ranger noticed another band using the water in the trap and again quietly closed the gate. This band was just three horses and a bay stallion dubbed Saturn. 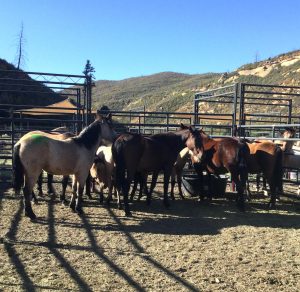 “The captures went just as we had hoped, with the horses becoming so calm and comfortable in the trap that there was literally no reaction when the gate was closed,” said the NMA. The park had hired Whit Hibbard, low-stress stockmanship expert, to supervise and orchestrate the transfer to the holding facility, which was also accomplished with little drama or trauma.

While the horses were held at the park, a federal vet processed all of the horses with Coggins testing, vaccinations, and health assessments. Twelve horses were then successfully transported to Dr. Patricia Irick of Mustang Camp in New Mexico for taming and training. Others were moved to a wild horse sanctuary. Patricia reported these are the tamest, friendliest horses she has ever received in her long career of taming more than 600 wild horses.

The horses and their training progress can be viewed on the Mustang Camp. 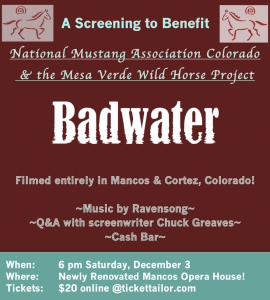 Do you live in the Four Corners area?

Support the NMACO by coming to the special preview showing of “Badwater” on Saturday, December 3 at the beautifully restored Mancos Opera House in Mancos.

Screenwriter Chuck Greaves will host the preview screening of the television pilot produced from his original script, which was filmed and produced locally with a number of local actors and extras, and with proceeds benefitting NMACO and the Mesa Verde horses.

Popcorn, movie food, and cash bar with cider from Fenceline Cider and beer and wine.