Talking with Mary Miller Jordan, you can’t help getting inspired. A premier competitor at next month’s American Horsewoman’s Challenge, she 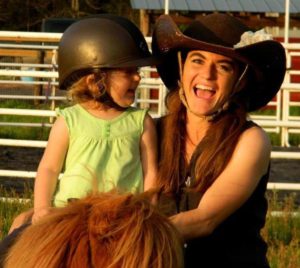 Mary and her daughter, Filleigh Kay

perfectly oozes energy and positivity. I reached her at her Kelly, North Carolina farm, where she was juggling horse work, chores, and minding her four-year old daughter, Filleigh Kay.

Miller Jordan has a long list of accomplishments to her credit, including training and competing with several mustangs and traveling as a motivational speaker.

The accomplished 33-year old was more than seven months pregnant with Filleigh Kay when she competed in the Extreme Mustang Makeover finals with “Lindsay’s Faith” a Wyoming mustang.

“I think some folks thought I was getting a beer belly,” she laughed. “But honestly, emotionally, I think it would do more damage if I stopped riding. Emotionally, I had to ride.” She was riding the day before delivery and hopped back on a week afterwards.

In 2011, Lindsay’s Faith and Miller Jordan were featured on America’s Favorite Trail Horse. Soon thereafter, the mare was immortalized as a Breyer Model Horse and became the subject of a children’s book, written by Miller Jordan.

Now, Miller Jordan is preparing “Line Dancer,” a Utah mustang, for the AHC on October 3-5. “Dance,” as she calls him, came to her from a family who couldn’t handle him, after acquiring the dun gelding through a satellite

“He’s so sensitive, extremely intelligent, and was as wild as could be when we first got him,” she said. Progress with him has been “like molasses…thank goodness this competition is not a Mustang Makeover (which has a time limit of 100 days) It took so long for that first touch. He doesn’t melt.”

Miller Jordan particularly appreciates the liberty component to the AHC competition and it seems she and Dance have the necessary connection. She was near him when we were chatting and the mention of his name got his attention.

“I have to be careful,” said Miller Jordan with a chuckle. “When he hears his name, he flips his head and comes my way.”

Miller Jordan wrote a poem about her struggles as a school girl and how horses helped her reach for her potential. She feels an affinity with horseman Guy McLean (who has shared the arena with Miller Jordan). recites her poem, on Line Dancer, here. 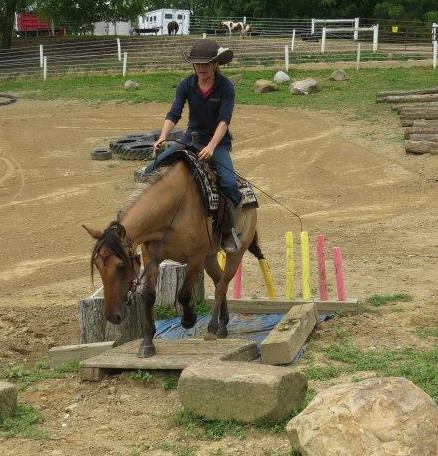