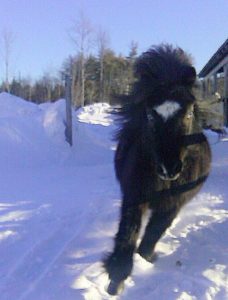 Question: How many horse owners does it take to change a light bulb?
Answer: Name any number. The light bulb won’t get changed because they’re too busy talking about horses, minis, donkeys, and mules.

Say this about our crazy community: we are passionate, enthusiastic, devoted, engaged and opinionated. We help each other in the best and worst of times. Especially during this winter season, we bear burdens with tough commitment, smiles of commiseration, and shakes of the head that say, “What next!?”

Community is one of the most gratifying elements of work here at NickerNews and BestHorsePractices. We love hearing from you. Recently, with our Winter Weigh In’s and Winter Warrior Muck Boot Contest, we’ve been hearing a lot. Here’s some more news from horse gals:

Kelly from Durham, Maine, cares for eight horses and sent this photo of her Nelson waterer.

“Three inches of ice from drool, but the Nelson is amazing,” she said, adding that with snow banks so high, her minis have finally stopped breaking out of the pasture.

We talked with Tom Dowd, head of customer service at Nelson Manufacturing. The Iowa company has been making the automatic waterers since 1949. They’re in zoos, they supply the Budweiser Clydesdales, and even serve a sheik’s racing thoroughbreds in the United Arab Emirates, he said.

This week, though, Dowd was mostly chatting with customers in cold weather states. He sent a new heating unit to a long-time customer in Palmer, Alaska, who needed to replace it after 12 years of service.

The heater might wear out after over a decade of steady use, but it’s much more efficient that livestock tank heaters. It costs about 18 cents a day to maintain the Nelson when the weather is zero degrees, according to Dowd. That’s a stark contrast to many horse owners we’re heard from who say their electricity bill has tripled this winter.

“We like to joke that when you plug in a tank heater, you can see the smoke coming off the electric meter,” said Dowd.
We’ve heard from scores of horse owners from New England, southeast U.S., the Midwest and Western States, Canada, and beyond. 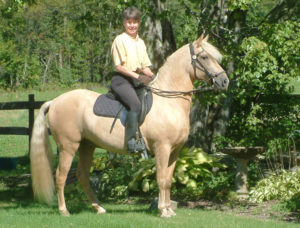 Carole, of Maine and Florida, poses with her pony, during a warmer moment

Carole, of Birds n Bees Farm in Hope, Maine, wrote to us:
“I am in Florida this winter, something I never thought I’d do because I’m not “old,” hate golf and RV parks. But I have discovered it’s a great place for walking and riding…I’m determined to get my ponies down here next winter.

Can you believe what they are going through in Maine? I’ve lived there nearly half a century and I have never seen a winter like this one. I don’t think my poor ponies can even walk around, it’s so deep.

We have testaments to that, Carole!

Not on facebook? You can submit your entry by emailing to info@nickernews.net
We love hearing from you.