Hal and Blue Rodeo on a run

Check out his website and find links to his books here.

Blue Rodeo bolted to my left and ripped the long training lead from my hands. He then raced ahead uphill, uncatchable. He caught the old Highline Trail Road heading north toward Locke Mountain at a gallop, then disappeared from sight. At some point I realized pursuit on foot was useless. I headed back to my truck, trying to form a plan. I had a wild burro lose, trailing a lead rope, on thousands of acres of national forest and no idea how I was going to get him back.

This much we know about Blue Rodeo:
He was trapped on Sept. 17, 2015, by the Bureau of Land Management’s Wild Horse and Burro Program as a 1-year-old at Black Mountain, Arizona. He arrived at my ranch by way of the BLM holding pens in Elm Creek, Nebraska, where he was picked up by my friend, Eric Lynn. The circumstances surrounding Blue’s capture and subsequent castration by the BLM are unknown, but the word “traumatic” probably would suffice. When he arrived at my place Eric had named him “Snort” because that was his reaction to any human encounter. Eric said if anyone could train him, it probably would be me.

Back to the task at hand:
I went home and returned with my fat bike, pedaling up the forest road to where I had lost track of Blue Rodeo. As I rode along I scanned for tracks. Sometimes it was the snakelike trail of the rope in the dirt. Sometimes the indistinct print of a hoof in the dry roadbed. I rode on following these signs, sometimes losing them, only to pick them back up again a ways down the road. I wondered how far he would go. Then suddenly the tracks seemed to end.

I got off the bike and looked around. After some searching I spotted a short rope track leading off into the woods. There I found an old deserted logging road and faint tracks that grew more indistinct until they were no longer evident. I left the bike in this old roadbed, and skirted around in the woods, finally finding a thin directionless trace of a rope drag. I walked south for some time, eyes to the ground. I found nothing. I circled back and found some indistinct tracks in the pine duff and followed them for a while. I did not know if they were the tracks of my burro or an elk, but I stayed on the trail, track-to-track, at last coming to a large outcrop of rocks. 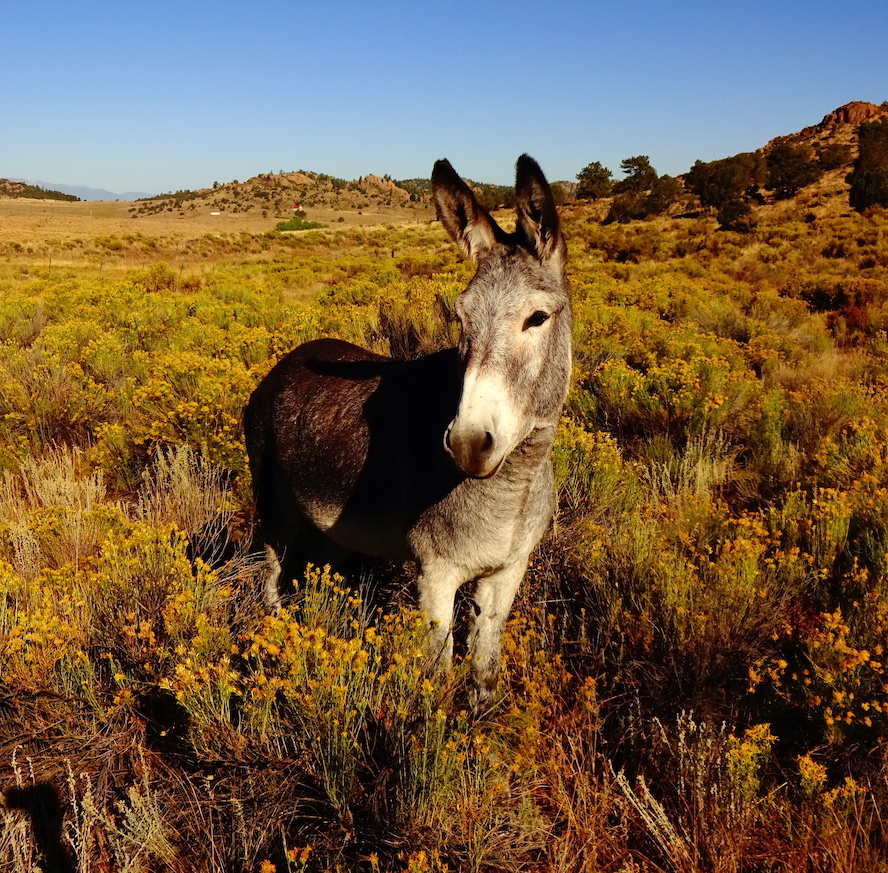 Blue Rodeo on a calmer day

I climbed up onto the rocks and took a look around. The land dropped off precipitously from this vantage point, miles and miles of steep, rocky country. The view spread out before me, painted with turning aspens from the southern Sangres to the north where smoke from the Decker Fire near Salida was visible, and beyond this, the Sawatch Range fading into the distance.
I studied the surrounding hillsides for the outline of a burro but could see nothing alive. The country was so big, so rugged, so steep. I knew my burro was out there hidden by scrub oak and pines, but so was a needle in a haystack. I considered the very real thought I would probably never see Blue again, and I resigned to the notion that I likely would have to give up the futile search and accept this as his karma meeting my own. Before turning away, out of diligence or intuition, I took one step closer to the edge and peered over the cliff.