Editor’s Note: Maddy Butcher wrote this piece for the Washington Post. But if you get blocked by the pay wall or would like to read the unedited version, here ya go:

A few days before giving birth to her second daughter, my friend headed out to check her herd. A lot of life is getting started this time of year and she didn’t want to miss a mama cow or a calf in distress. In the northern Colorado wind, she drove the pickup and walked the fields. Sadly, she told me, a life ended that day, too. She found one of her older horses, a trusty gelding named Skeet, with a severe laceration. The tough decision was made to put him down. He was left for the coyotes.

I have no doubt that this friend, like other women I know in the rural west, will continue to enjoy the tribulations, the mud and wind, the cold and heat of an agricultural life. No doubt she’ll raise her two girls to be equally seasoned by landscape, animals, and weather.

They are the most feminist of feminists. But don’t call them that. Most are uninterested with gender politics and unversed in the vernacular of “assertive communication” and “self-advocacy.”

Soft-spoken, they practice what one observer called “soft power.” But they are not soft. They are active, but not activists. 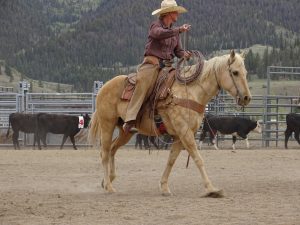 At the Outside Circle Ranch Roping

Women in agriculture are building bridges, being neighborly, and embracing new ideas. Some say they are leading the push for best practices around stockmanship, regenerative agriculture, and holistic management. They may be quiet and headline-evasive, but in this era of anger and outrage, we could all learn something from them.

Gender politics? The country and the nature of the work shape men and women more than any corporate training. A long stretch of moving cattle over rough country, covering an area the size of Washington DC but with streams, mountains, and busy road crossings, is a rural kind of policy development with listening sessions.

At the end of the day, what matters and what is acknowledged is a job done well. While gentlemanly decorum persists (hat-tipping, ‘yes ma’aming, door opening, two-step leading), the workplace dynamic can be refreshingly gender-blind and merit-based.

Who moves cows with the least amount of stress? Who knows best how weather will shift? Who gets the most accomplished horseback? Gender did not determine success at the Tokyo Olympics (where women captured four of nine individual equestrian medals) and it doesn’t here either. Rather than brawn, it’s savvy and intuition that reign. 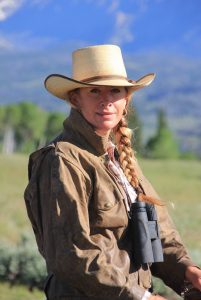 Fallon Turner, a bookkeeper who also works the family ranch in northern California, recalled a recent branding where she and her brother recruited a few high school footballers to help. They outweighed her in bravado, strength, and weight, yet struggled to knock down the calves. She showed them how to use leverage and body position. “It’s basic physics, boys!” she recalled with a laugh.

Nicole Qualtieri lives in Montana, where she rides, hunts, and fishes mostly alone. Life and death are regular parts of her conversations as hunt and fish editor for Gear Junkie. “We’re constantly testing our ability to be vulnerable and strong,” she said.

Ego suppression can be especially helpful here. When working with animals (domestic or wild), putting up a fight is often futile at best, disastrous at worst.

Take a stand. Assert yourself. Make your presence felt. They may be popular office ambitions, but those attitudes run contrary to best outcomes here. Instead, you’ll hear people suggesting, not telling:

Set ‘em up for success.

Even the universal command for a dog to stop working is the decidedly undogmatic: That’ll do. 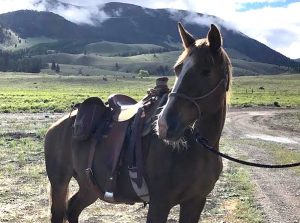 Self-reliance and teamwork are parallel strategies taught early. More than once I’ve stopped to help women who’d pulled over on the side of a busy highway with a flat tire on their horse trailer. This scenario can be more problematic than a simple car tire flat because horses often must be offloaded and held or tied while traffic whizzes by.) None needed my help but thanked me all the same. Most recently, I watched a skinny, 10-year old cooly unload the horses while an older woman, her aunt perhaps, muscled the spare into place.

Audio producer Ashley Ahearn was a vegetarian living in Seattle before she moved with her husband to rural north central Washington. She volunteered to help local ranchers, gathering cows on her mare, Pistol. She identified the soft power and saw “how hard it is, day in, day out, [through] blood, sweat, and tears, to raise livestock.” She developed Women’s Work, a Boise State Radio podcast about how women are changing the face of ranching and land stewardship. It’s one of the most popular shows KBSU has ever aired. Ahearn likes her steak, bought locally from the Fink Cattle Company, medium rare.

When you look past the tellers at the Dolores State Bank in Mancos, Colorado, there’s a framed painting of a horsewoman in wide-brimmed hat, red shirt, chaps. Behind her, a sign declares in all caps: “Horsemen Only.” Her expression looks peaceful, pleasant and she seems to be ignoring the sign. Does gender matter? Not in my mind, she seems to say.